Review: Anything To Have You - Paige Harbison

Anything to Have You by Paige Harbison, published by Mira Ink on 7th February 2014

Goodreads synopsis:
Natalie and Brooke have had each other's backs forever.  Natalie is the quiet one, college bound and happy to stay home and watch old movies.  Brooke is the life of every party, the girl everyone wants to be.

Then it happens - one crazy night that Natalie can't remember and Brooke's boyfriend, Aiden, can't forget.  Suddenly there's a question mark in Natalie and Brooke's friendship that tests everything they thought they knew about each other and has both girls discovering what true friendship really means. 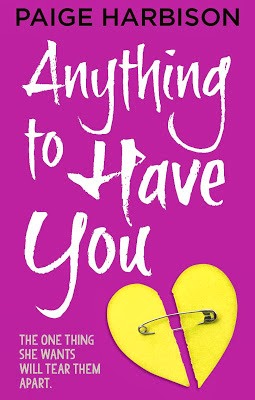 Review:
I really wanted to read 'Anything To Have You' because I've enjoyed both of Paige Harbison's previous YA novels and I thought this would be an interesting exploration of friendship between two best friends.  It started off well but while I liked the idea for the story and the way it developed throughout the book, I really struggled to connect to either of the main characters.

The two female protagonists have completely contrasting personalities, which makes them an unusual pairing.  I identified with Natalie in the beginning because she is much keener on staying home and baking or watching old movies, than she is of going out and partying.  Brooke, on the other hand, is a bit of a wild child and likes nothing more than to go out to parties and to get drunk.  She flirts with other boys but she also has a long-term boyfriend, Aiden.  Although I liked Natalie in the beginning, I couldn't help but feel like she allowed herself to be led quite easily at times and should have stood up for herself more.  She ends up going to a party where things get out of hand and wakes up the next morning in a bed with Aiden beside her...but with no recollection of what actually happened.

From them on, the book alternates between the perspectives of the two girls as they cope with the changes in their lives and in their friendship.  However much I tried, I just couldn't find anything to connect me with Brooke who seems intent on self-destructing.  I also found that the constant jumps in the narrative and time-frame, sometimes made the story feel a bit disjointed.

There's a big reveal near the end which I assume was meant to be unexpected, but within a few chapters of the book I could see the direction in which the plot was going to go and I quite easily guessed what was going to happen to the characters.  I was slightly surprised by the outcome for Brooke but she still didn't seem like the type of girl that I would have wanted to know.

There was also quite a lot of swearing throughout, almost excessive amounts I thought, which I didn't think was particularly needed.  Not all teenagers talk like this.

Although the book was no where near as good as I was originally expecting, I'm still a fan of Paige Harbison's work and I'll continue to look out for new offerings by her in the future.