Vengeance by Megan Miranda, published by Bloomsbury on 13th February 2014

Goodreads synopsis:
When Decker drags his best friend Delaney’s lifeless body out of the frozen lake, he makes a deal: Anyone but her. Everyone but her. The lake releases her. It takes another...

All their friends blame Delaney for Carson’s death. But Decker knows the truth: Delaney is drawn to those who are dying, and she would have tried to help Carson.

Or so Decker believes until a body lies in front of him in a pool of water on his kitchen floor. Until he sees in Delaney’s eyes that she knew this would happen too – and she said nothing. Until he realises it isn’t the lake that is looking for revenge – Delaney is part of someone else’s plan. 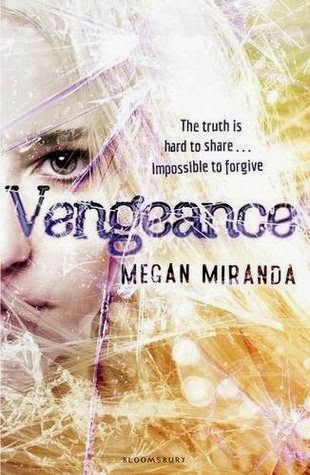 Review:
This is the sequel to 'Fracture' which is one of my favourite books.  I thought it was amazing the first, second and third time I read it!  'Vengeance' was therefore one of my most anticipated books of the year and hit the top of my TBR pile immediately.  I love the new look covers for the series which look so pretty on my shelves.

The story is told from Decker's point of view.  A part of me missed seeing events unfold from Delaney's perspective as I love her character but it didn't take me long to adjust to the change of narrative.  It was interesting to hear first-hand how Decker was dealing with everything that had happened between the two of them in the previous story.

Decker, Delaney and their circle of friends believe that they've been cursed by Falcon Lake after Delaney was pulled from the water.  Does the lake have the power to destroy them or are they looking in the wrong place for answers?

A really shocking and unexpected event occurs at the start of the book which I thought was a bold and brave choice by Megan Miranda.  It sets in motion a chain of events which unfold between Decker and Delaney and threatens their future together.  The ramifications of this are felt throughout the whole story as we see Decker struggling with feelings of grief, anger and sadness.  He's emotionally traumatised and pushes away those closest to him.  I missed the closeness between him and Delaney and spent much of the time wishing that he would just forgive her.

I enjoyed the creepy atmosphere which hangs over all the characters and leaves the reader in the dark and frantically guessing about what is truly going on.  Megan Miranda teases things out and lets the tension build wonderfully.

'Vengeance' is the perfect winter read and cements Miranda's place as one of my favourite authors.  She can do no wrong!