Goodreads synopsis:
Brenna Blixen has the perfect boyfriend. He's sweet, sexy, loyal, and sure that Brenna is the best thing that's ever happened to him. But being the perfect girlfriend isn't as easy as Brenna thought it would be, and the pressure that comes with trying to be Jake's everything is beginning to weigh on her. When her mother surprises her with a trip to Paris over winter break, she's torn. She anticipated spending her vacation snuggling with Jake Kelly, ice-skating, drinking cocoa, and relaxing...but what girl in her right mind would turn down a trip to Paris?

Things only get more confusing when she winds up unexpectedly and unavoidably thrown into Saxon Maclean's arms in the City of Lights. Far away from the comfort and stability she finds at Jake's side, Brenna faces down the feelings that have been swirling through her since the day she laid eyes on Saxon. Is it fair for her to call herself Jake's girlfriend when she has so many unresolved feelings about someone else?

Brenna is determined to figure it all out, even if it means making some of the hardest decisions of her entire life. She also learns that every single thing she does has rippling repercussions, some that fill her with total regret. By the time she figures out what her heart truly wants, she realizes that she may not be able to have it after all. 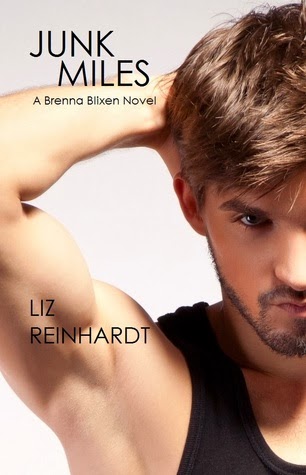 Review:
'Junk Miles' is the second book about Brenna Blixen, following her as she goes on an adventure in Paris and gets her heart torn in two different directions by handsome boyfriend Jake Kelly and his irresistible brother Saxon.

I really like the character of Brenna.  She's open to experiencing new things and she always seems to live life to the full.  Although she loves Jake, she continually feels like he puts her on a pedestal and his idolisation of her makes her feel suffocated at times.  On the other hand, she's wildly attracted to bad boy Saxon and when she discovers that he's on the same trip to Paris as her, she can't seem to stay away from him.  Personally, I love Jake Kelly and at times I couldn't understand why she would even look at another guy but there were some definite sparks between her and Saxon which she wanted to face up to and I did admire her bravery in daring to take a risk.

I had mixed feelings about Saxon.  I found his manner quite obnoxious and not very charming at all but I think underneath his tough exterior, there's a softer side to him waiting to come out.  He's obviously had a difficult home life, which hasn't been helped by the deterioration of his friendship with Jake.  I ended up hoping that things would turn around for him in the future.

This was a brilliant contemporary romance which I really loved.  I devoured the book in one sitting and then immediately picked up the next in the series 'Slow Twitch'.  Liz Reinhardt is my new favourite author and I definitely need to get my hands on all of her other books now, especially if they're as good as this one!
Posted by Samantha (A Dream of Books) at 00:00