Today I'm taking part in the blog tour for Romily Bernard's debut novel 'Find Me' which was recently published in the UK by Simon and Schuster. 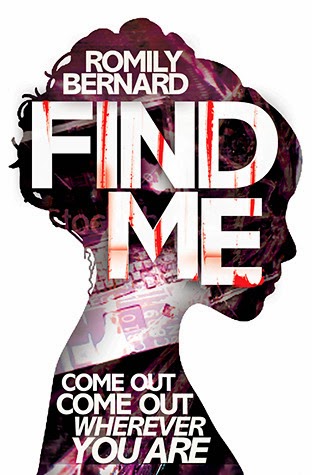 Top Five Feisty Heroines
1.      I think every list of Feisty Heroines has to begin with Katniss Everdeen from The Hunger Games, don’t you? Katniss is cold, deadly, and yet in the midst of the Hunger Games’ violence, she demonstrates far more humanity than any of the softer, kinder characters around her. Plus, she can shoot and climb trees and there’s the whole Peeta-Gale thing…wow, Peeta and Gale…where were we? Oh, yeah.

2.      Blue Sargent from The Raven Boys. Blue’s the only non-clairvoyant in a family of clairvoyants. Her biggest strength? Making other psychics stronger. She could have easily dissolved into a stand-by heroine, a girl who’s along for the ride, but Maggie Stiefvater makes her so much more. When Blue tells Gansey: “I’m not a thing. To have.”, she reminds readers and herself that she may make others stronger, but she’s still her own person. Blue’s strong enough all on her own.

3.      Hazel Grace from The Fault In Our Stars. She’s funny, sarcastic, and has zero desire to be anyone’s hero. Hazel isn’t afraid of confronting the ugly side of cancer. It’s the touchy-feely, “live your best life today” stuff that drives her around the bend. For me, that’s what
makes her a great heroine though. She calls things like she sees them—whether they’re horrible or wonderful.

4.      Elphaba from Wicked. Yep, that’s right. The Wicked Witch of the West is one of the most amazing, feisty, fantastic heroines I’ve ever read. I enjoyed the book. I adored the play. Elphaba understands what it’s like to be different and she champions characters that have been silenced. And, hey, who doesn’t love green?

5.      Hermione Granger from the Harry Potter series. I love Hermione, but then again who doesn’t? She’s crazy smart, will tell the boys to shove it, and understands the annoyance of hair product. Remember when she had to do that major potion to tame her curls and tangles before the dance? Yeah, you do. She rocks and she knows it.
Posted by Samantha (A Dream of Books) at 09:11