Defy the Stars by Sophie McKenzie, published by Simon and Schuster on 2nd January 2014

Goodreads synopsis:
After months apart, everyone thinks that River is successfully building a future without Flynn. Indeed, she has almost convinced herself that she is moving on. And then, one day, Flynn is back, bringing with him tales of his glamorous new life. River suspects his lucrative new work involves some form of criminal activity, but will she let herself be drawn back into Flynn's world? Or is this, finally, the end of the line for them both? 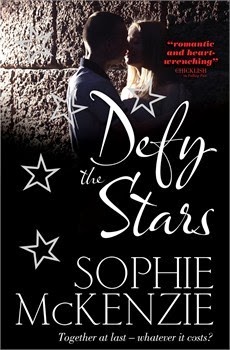 Review:
'Defy the Stars' the final instalment in the series about River and Flynn will, I feel, divide opinion among readers who have invested a lot in these two characters and their love story.  Having followed them and rooted for them all the way, Sophie McKenzie finally wraps up their epic romance but not necessarily in the way which will please everyone.  Flynn appears back in River's life after she's finally begun to get her life in order again but the crux of the book is whether or not they can ever get their happily ever after.

Personally I was disappointed with the outcome of the story, as I had very different feelings about how I wanted things to be left.  However, although it may not have been the ending I would have wished for, I still think it was brilliantly written and extremely intense and moving.  I was totally gripped as events unfolded.

This is quite a different book in the series, veering on the side of being a thriller which I thought made it even more exciting.  I read it in one sitting as I'm sure a lot of other readers will.  Flynn and River have both grown-up a lot and matured while they've been apart.  Flynn still seems to make some stupid choices at times but I could see that he had River's best intentions at heart which definitely endeared him to me.  Especially after losing faith with him in the previous book.

'Defy the Stars' concludes a heart-breaking and emotional series of books about first love from one of my favourite British authors.  If you've yet to discover this series then I would recommend getting your hands on book one, 'Falling Fast' which introduces the young lovers for the first time.