Roomies by Sara Zarr and Tara Altebrando, published by Hodder on 2nd January 2014

Goodreads synopsis:
When East Coast native Elizabeth receives her freshman-year roommate assignment, she shoots off an e-mail to coordinate the basics: television, microwave, mini-fridge. That first note to San Franciscan Lauren sparks a series of e-mails that alters the landscape of each girl's summer -- and raises questions about how two girls who are so different will ever share a dorm room.

As the countdown to college begins, life at home becomes increasingly complex. With family relationships and childhood friendships strained by change, it suddenly seems that the only people Elizabeth and Lauren can rely on are the complicated new boys in their lives . . . and each other. Even though they've never met. 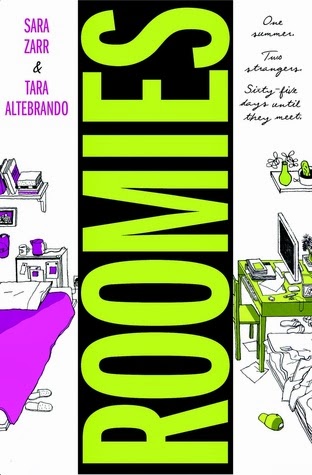 Review:
I really, really enjoyed this book.  Far more than I originally thought I might.  It is in fact my first five star read of the year.  I can't wait to go back and pick it up again for another re-read.  'Roomies' is co-authored by Sara Zarr and Tara Altebrando.  I've not read anything by either author before, although I will now be looking out for titles by them in the future.

The narrative is split in the book between Lauren and Elizabeth or EB as she's called, who are set to be college roommates.  There's a mix of first person narrative, as well as a series of emails between the two girls as they get to know one another before they officially meet in person and become fellow students.  Normally I'm not a huge fan of books which use emails as a communication device between characters.  However, it worked perfectly here and I really liked the flow of dialogue between the girls as they begin to open up and share their secrets and fears with each other.

My favourite character in the book was Lauren and I loved her wonderful, crazy, big family of eight.  There were aspects of her character which I could personally identify with and I just enjoyed so much reading about her and her younger siblings and the amazing bond they have.  She and Elizabeth come from extremely different backgrounds and have contrasting home lives but often seem to envy what the other has.  I will admit that I actually had a little cry near the end when Lauren has to leave her family behind.

'Roomies' is about moving onto that next big step, about becoming independent and progressing from childhood to adulthood.  It's also about leaving people, places and things behind and embracing the new.  These are all themes which I'm sure will resonate with young readers, as they will be facing many of these things themselves.  The story is a truthful and honest account of taking that step into the unknown and learning to embrace change as something positive, even when it can feel scary and frightening.  A brilliant read, I absolutely loved it!
Posted by Samantha (A Dream of Books) at 00:00