I have a great guest post today from Alma Katsu, author of 'The Descent' which was published in the UK by Arrow on 2nd January.  I can't believe this wonderful series is finally over! 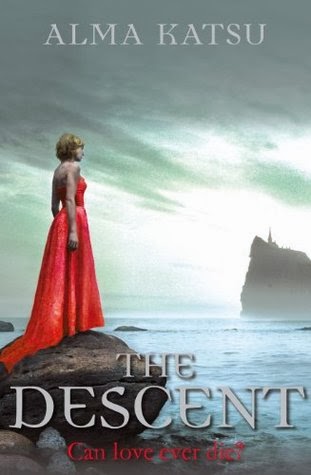 The Immortal Trilogy is the story of one woman’s long and difficult journey to understand the true meaning of the mysterious thing we call love. In The Descent, we come to the end of her story—or do we?
A Day in the Life of Lanore McIlvrae
Massive spoilers ahead! If you haven’t read The Descent yet, do not read on if you want to be surprised by the book’s ending.
A bit of time has passed since the events of The Descent. We’re still on the island, Adair and I. We’ve been joined by a fellow named Dante. If he were a woman you’d call him a maid of all work. I don’t know what the equivalent is for a man. He’s become indispensible here.
Usually we’re awake early on the island. Dante will get me up by seven a.m. if I’m not already awake, bringing in a tray with a bowl of café au lait. Adair has usually been up for at least an hour by now and is downstairs, keeping the children occupied.
Yes, that’s the big surprise I have for you: we have two children now. A daughter, Isabella, three years old, and a son, Nym, who is about to turn one. Isabella takes after her father. She has his curly dark hair and green-gold eyes but more than that, she is like him in so many ways. A hellion, that one, and it’s more than a little fitting that a man who was such a horrible womanizer in his time should have a daughter. I wouldn’t say Nym takes after me as he is a real angel, my little man, and we all know that I am not. At the very least, he has my coloring and my blonde curls, though his are as soft as gossamer. I couldn’t believe it when I found out I was pregnant the first time, after so many years of thinking I would never have a child. It really is quite a miracle, when you think about it.
We’ve decided to stay in the fortress for now. I’ve reconciled myself to its mysterious tricks and resolved to keep a close eye on the children, not to let them go wandering. As far as staying on the island, well, it seems like a safe place to raise children as long as you teach them a healthy respect for the water. This is where Dante comes in handy as he’s nimble as a mountain goat and there’s no place the children can get to that he can’t follow them. I figure we’ll stay here a little while longer but eventually we’ll need to move to the mainland so the children can have a more normal upbringing.
Adair is a good father. He usually spends the entire morning with the children and, after lunch, leaves the rest of us to go to his study. Lately he’s been working on translations of the old tomes left behind by the previous occupant. Yes, those old books of occult philosophy, as Adair likes to call them. I imagine he wants to publish them someday.
The past four years have been quiet. Serene, almost. But you know, I can’t help worrying. Looking over my shoulder. It’s because of the island. What Adair had said is true: it’s the spot where this world and the underworld are at their closest. I can’t help worrying that the forces in the next world, the ones we put behind us at the end of The Descent, will come looking for Adair day. I’m afraid that they’ll want him back. The love of my life, the father of my children. I try not to think about it but after everything we went through in this house, I can’t put it out of my mind. And if that happened, I don’t know what I would do. I really don’t.
Posted by Samantha (A Dream of Books) at 00:27