Goodreads synopsis:
Waverly and the other members of the Empyrean have been scattered, and their home ship destroyed. The mission to rescue their parents didn't go quite as planned, and now they're at an even greater disadvantage: trapped with their enemies on the New Horizon, trying to find a way to survive. Will Seth's health hold out long enough to help Waverly topple their enemy? And will Waverly find a way to unite her friends before the final battle? Nothing is certain and every second is a risk in this explosive finale. 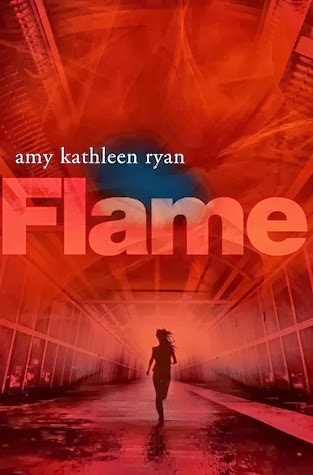 Review:
'Flame' is the concluding part of Amy Kathleen Ryan's Sky Chasers series.  It's also one of the best sci-fi books set in space that I've ever read.  Every detail is brilliantly depicted and the very real human struggle for survival makes for compulsively addictive reading.

Waverly and the other residents of the Empyrean are now facing life on-board the New Horizon spaceship and are struggling to adjust to being under the rule of the manipulative Anne Mathers.  Waverly, along with Kieran, are both being used as pawns by those that want to rule the ship and find themselves caught in the middle of a dangerous power struggle.  Each chapter is alternatively told from their point of view, along with Seth, who we last saw isolated and alone on the Empyrean.  Sick and in terrible trouble, Seth becomes a hunted fugitive as he seeks to stay alive.  Each character is well and truly tested to the limit in this final instalment, as life and death truly are both on the line.

Amy Kathleen Ryan doesn't take her foot off the peddle once as the action hurtles along at full speed.  I was totally absorbed and immersed in the world she's created and sad to reach the final page of what has been a rollercoaster adventure.  The whole trilogy has been full of excitement, explosive action and unexpected twists and turns with brilliant characters who have been faced with a series of impossible decisions to make.

This book is a wonderful end to the series and I would never have guessed when reading the first book 'Glow' how everything was going to eventually work out.  Nothing was as I expected.  Tense and nerve-wracking, 'Flame' did justice to a tremendous story arc which never once failed to deliver.
Posted by Samantha (A Dream of Books) at 00:00