Goodreads synopsis:
When fairies stole her brother, Red vowed to get him back. Now trapped in the fairy realm, she begs an audience with the fairy court where she strikes a bargain. Her brother will be returned - but only if she can complete a task set by the court. In a world of trickery and deception, Red is about to find that not all is as it seems. For even if she succeeds, will the fairies keep their promise? 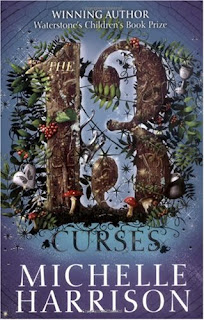 Review:
This is the second book in a trilogy which began with ‘The Thirteen Treasures’.  Yet again, I’ve read book 2 first but it really didn’t matter because I immediately got swept along with the story.  ‘The Thirteen Curses’ is an imaginative romp through the faerie world.  Michelle Harrison has crafted a magical world of faeries and goblins that is so absorbing I forgot where I was at times!  The first few pages take the reader straight into the flow of the story and we join Red as she attempts to rescue her younger brother James, from the faeries who whisked him away from.  She’s assisted by various characters that were introduced at the start of the trilogy, but although these were unfamiliar to me at first, it didn’t take long before I felt like these were old friends.  There’s Tanya and her good friend Fabian, Warwick the groundskeeper, Tanya’s grandmother Florence, who also has the second sight and housekeeper Nell.  Harrison spends sufficient time in exploring the characters of each of these figures, even as the narrative rockets along, throwing up a multitude of twists and turns.  There’s almost no opportunity to stop for breath when reading this book as it’s a real rollercoaster of a ride!

The story alternates between the human and faerie world and interspersed throughout are a series of flashbacks, narrated by Red and unravelling the tale of her and her brother and how she first came to encounter the many fey that feature throughout the book (I particularly loved Brunswick, the goblin that lives in the gardens.  He’s so sweet!)  This was good because it filled in a lot of useful background information and made the story even more vivid.  Without giving away any spoliers, I would say that I wasn't entirely happy with the ending, but I think it's just a case of personal opinion.  Everything else about it, I absolutely loved!
Elements of the book at the very beginning, reminded me a little of ‘The Book of Lost Things’ by John Connolly and it had that same fairy-tale feel but the story was so original and exciting that it stands alone as a superb addition to the YA genre by an amazing new author.
I’m thrilled to know that Michelle Harrison’s third book in the trilogy, 'The Thirteen Secrets' is being published by Simon & Schuster on February 3rd 2011.  I wonder where she’ll take the story next!
Posted by Samantha (A Dream of Books) at 08:39