I picked this book up from the library because like millions of others I'm a huge Twilight fan and eagerly awaiting the release of the official guide. 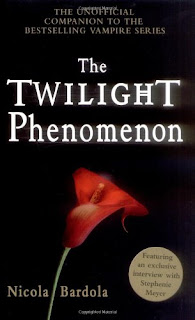 Review:
This is the unofficial companion to Stephenie Meyer's bestselling series.  It looks at the whole phenomenon of the Twilight books and why they've become so popular all over the world.  There are some really interesting segments in this companion including an interview with Stephenie herself, a closer look at 'The Secret of Eternal Love' between Edward and Bella and 'Twilight and Literature' which I found particularly fascinating.  The latter chapter focused on some of the narrative devices employed in the saga and the literary references which have been incorporated to titles such as 'Wuthering Heights', 'Romeo and Juliet' and 'A Midsummer Night's Dream'.

Interspersed throughout were interviews and quotes from some of the Twilight fans that were intereviewed by the author.  So many of these perfectly summed up the way that I feel about the books.  They produce such an outpouring of feeling and emotion in readers and fans, that I actually felt quite bereft when I'd finished them!

There was an alphabetical list of Twilight keywords in the back of the book and an interesting section dedicated to some of the real-life locations that Stephenie wrote about.  I'd love to visit some of these one day.
Posted by Samantha (A Dream of Books) at 11:05