Teaser Tuesday is a weekly book meme hosted by MizB of Should Be Reading.

Kiss of Life by Daniel Waters 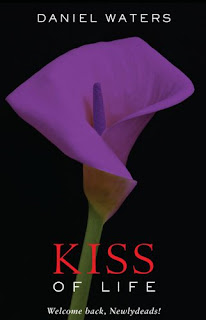 Goodreads synopsis:
The phenomenon that's been sweeping the country seems to be here to stay. Not only are the teenagers who have come back from their graves still here, but newlydeads are being unearthed all the time. While scientists look for answers and politicians take their stands, the undead population of Oakville have banded together in a group they're calling the Sons of Romero, hoping to find solidarity in segregation.

Phoebe Kendall may be alive, but she feels just as lost and alone as her dead friends. Just when she reconciled herself to having feelings for a zombie -- her Homecoming date Tommy Williams -- her friend Adam is murdered taking a bullet that was meant for her. Things get even more confusing when Adam comes back from the grave. Now she has romantic interest in two dead boys; one who saved her life, and one she can't seem to live without.
Teaser:
"Holding her breath, she forced herself to hold his non-stare.  Some of my best friends are dead, she told herself.  This boy more be more dead in appearance, but he's no less a person than they are" [Page 15]

This was a recommendation from a friend which I've just started.  It's actually book 2 in the 'Generation Dead' trilogy but I don't think you necessarily need to have read the first one to make sense of the story.  It's good so far!
Posted by Samantha (A Dream of Books) at 12:31