Killing You Softly by Lucy Carver, published by Macmillan Children's Books on 3rd July 2014
Goodreads synopsis:
After the tragic events of last term, Alyssa arrives back at St Jude's to a school full of freaked-out students. They are wary of her ability to remember every tiny thing they do, and Alyssa's beginning to feel lonely and ostracized. Then she gets an email, seemingly from a secret admirer. He teases her about her photographic memory and challenges her to prove how good it really is. At first Alyssa is intrigued and likes showing off her talent, but as her admirer's challenges get darker and more extreme and there is a murder in the nearby town, she realizes she's in too deep. Now her memory might be the only thing that can help her understand the killer and save her from the same fate ... 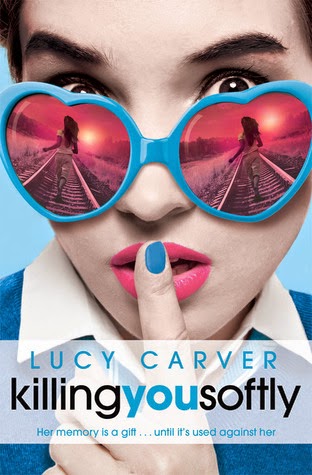 Review:
This is the second book in the series about main character Alyssa and the girls of St Jude’s Academy.  Alyssa’s photographic memory comes in handy when a local girl dies and she begins to find unusual links between the two of them.  She’s unable to resist investigating the death, when she starts to receive taunting clues and messages, indicating that someone is playing a taunting game of cat and mouse with her.
This series reminds me so much of the TV show ‘Unforgettable’ which is about a female detective with perfect memory recall.  This is a trait which Alyssa shares and makes each mystery even more interesting because you know that even the smallest detail could be the one that breaks the puzzle and solves the case.  There are several passages throughout the book where Alyssa has to think back on things that have happened or conversations that she has had with people.  I always try to pay careful attention to these because I’m desperate to spot the clues that are vitally important.
Interspersed with the murder mystery, are scenes between Alyssa and her boyfriend Jack, who is still as adorable as ever.  She is definitely one lucky girl!
The ending of the book was so surprising!  I thought it was incredibly well potted and it really got me thinking hard to try and put all the clues together.  I love books which are so full of twists and turns that by the end I still have no idea who might be responsible.  This conclusion definitely provided a lot of shocks.
I’m not sure if Lucy Carver is planning another book about Alyssa but I hope so because this is shaping up to be a fantastic YA series, featuring lots of my favourite things to look for in a story – drama, intrigue and mystery with a fab boarding school setting and a great cast of characters.
Posted by Samantha (A Dream of Books) at 00:00