Eversea by Natasha Boyd, published by Headline on 10th April 2014

A Hollywood A-list mega-star, on the run from his latest scandal and with everything to lose.

A chance encounter that leads to an unlikely arrangement and epic love affair that will change them both for ever. 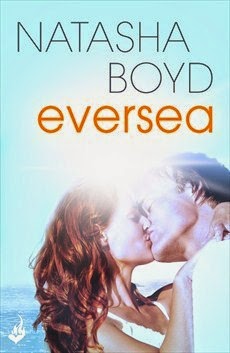 Review:
'Eversea' is set in Butler Cove, South Carolina which is like my dream seaside town.  It is small enough that everyone knows each other, with sea, sand and romance right on the residents' doorsteps.  The main character Keri Ann has grown-up in Butler Cove and it is the only place that she has ever called home.  With her older brother away at school and both her parents dead, she only has her best friend Jazz to rely on, until Jack Eversea - a gorgeous and famous actor, walks into her life and sets her heart spinning.

'Eversea' is a gorgeous romance which weaves a beautiful story about love against the odds.  Keri Ann wasn't expecting to have her heart stolen by the handsome stranger who appears in her bar one night, but this is a love which although against the odds, will be hard fought for and cherished.

I really liked Keri Ann who is somewhat of an old soul.  She is scared of opening herself up to anyone after having suffered terrible loss but Jack seems to wear down her resistance and makes her want to start living again and taking chances.  She has settled for a life which she believes she must accept but he shows her that there is so much more out there for her to experience.

Handsome Jack Eversea is definitely my new boy crush!  Phwoar, he is hot, hot, hot!  I fell head over heels for him from the start.  Although he is a famous movie star, he is incredibly down to earth and the sparks between him and Keri Ann are off the chart.  I loved the way that the tension simmered away between them and built to a real fever pitch.

I was captivated and swept away by 'Eversea' which was impossible to put down.  I would highly recommend this book to fans of the New Adult genre and I am utterly desperate now to read the sequel 'Forever, Jack' so that I can revisit my two favourite characters.
Posted by Samantha (A Dream of Books) at 00:00