Unstoppable by Liz Bankes, published by Piccadilly Press on 1st July 2014
Goodreads synopsis:
Rosie has managed to wangle spending the summer before uni in the same house as her boyfriend Cal – but who else should also be staying except for the infamous man-eater, Cleo.

Things between Cal and Rosie could never have been described as easy, but her growing jealousy seems like an unstoppable force. Can their love weather the storm? 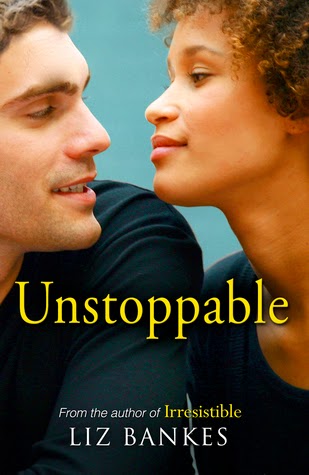 Review:
This is the third book by UK YA author Liz Bankes. It features my favourite so far of her female characters - the perennial worrier Rosie, who is about to move in with her boyfriend Cal and start a brand new internship in Oxford. Rosie worries about everything (and with so many changes going on in her life, there are a little of things to occupy her mind) and feels socially awkward a lot of the time. She’s been with Cal for a year and the two of them seem quite secure in their relationship until Rosie freaks out about the fact that man-eater Cleo is moving into the house too.

Rosie undergoes a big transition throughout the book. She is at that crux point where she has to decide what she wants to do with her future and she has to finally stand up for herself and not bow to the pressure that her Mum is putting her under.  This is something that everyone has to face at some point and it was interesting seeing Rosie begin to develop confidence in herself and find her own chosen path.  She also learns a lot about relationships and trust as she and Cal have to weather the ups and downs of their romance.
‘Unstoppable’ features lots of familiar faces from Liz Bankes earlier books. There’s Mia and Gabi, as well as Jamie and Dan. It was great to catch up with them and see how all the friends were getting on and in which direction their lives were headed in next.

This was a sweet romance and a great summer read. I missed a little of the polish of some of the US YA books which I read but I still really enjoyed this one.  It had a great mix of humour with drama and romance. I read it in one sitting and look forward to my next Liz Bankes story.
Posted by Samantha (A Dream of Books) at 00:00