Since You've Been Gone by Morgan Matson, published by Simon and Schuster on 3rd July 2014

Goodreads synopsis:
The Pre-Sloane Emily didn't go to parties, she barely talked to guys, she didn't do anything crazy. Enter Sloane, social tornado and the best kind of best friend—the one who yanks you out of your shell.But right before what should have been an epic summer, Sloane just... disappears. No note. No calls. No texts. No Sloane. There’s just a random to-do list. On it, thirteen Sloane-selected-definitely-bizarre-tasks that Emily would never try... unless they could lead back to her best friend. Apple Picking at Night? Ok, easy enough.Dance until Dawn? Sure. Why not? Kiss a Stranger? Wait... what?

Getting through Sloane’s list would mean a lot of firsts. But Emily has this whole unexpected summer ahead of her, and the help of Frank Porter (totally unexpected) to check things off. Who knows what she’ll find? 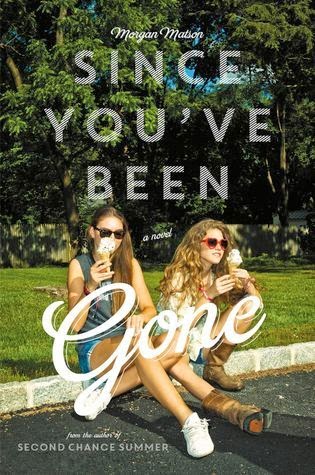 Review:
Since You’ve Been Gone’ is Morgan Matson’s third book and focuses on the friendship between Emily and her best friend Sloane.  The two of them have made all kinds of plans about how they are going to spend their summer together but when Sloane and her family disappear, Emily doesn't know what to do.  She struggles to know who she is and how she fits in.  What I liked about this book is that I could really identify with the character of Emily.  She’s quite shy and reserved and she relies on Sloane always taking the lead.  That way she never has to take risks or do anything outside of her comfort zone without first knowing that she has someone with her to take the first step.  A lot of the story is about Emily learning who she wants to be and developing her own personality outside of being known as ‘Sloane’s friend’.  That can be a difficult thing to do but I loved the fact that she is pushed to be brave and daring and find her own feet.

I have to say that when I started reading this book I thought there was going to be a more complicated explanation for what had happened to Sloane.  I thought she might even have died!  It was only when I got to about the mid-way point that I realised that Sloane didn’t actually matter a huge amount to the story.  It’s Emily's own personal development which lies at the heart of the book.
Sloane leaves Emily a list which she spends her summer working her way through.  Each item on the list challenges her in different ways but also brings her closer to a whole new set of friends, which she wouldn’t have made if she’d been stuck to Sloane’s side the whole time.  One of these people is Frank who is sweet and funny but already has a girlfriend.  I’ll admit that I wasn’t too sure about Frank to start with but he grew on me over the course of the book and by the end he’d totally won me over.
This book was quite long but don't let that put you off because it's a sweet, summer read about growing-up and finding your place with people who understand you and let you be the person you're meant to be.  If you love contemporary YA then I recommend you read this title which I ended up really enjoying.
Posted by Samantha (A Dream of Books) at 00:00