Shredder by Niall Leonard, published by Definitions on 5th June 2014

Goodreads synopsis:
Former boxer Finn Maguire - Crusher to his friends - has one task to perform: to deliver an invitation to a meeting. But when that meeting is between The Turk and the Guvnor - two criminal overlords fighting for control of London's underworld - his task is anything but simple. As the city swelters in a heatwave and the country is rocked by a series of terrorist atrocities Finn is dragged into a bloody gang war marked by double-crosses, intrigue, corruption and treachery. Fighting to save himself and the girl he loves from being shredded between the opposing factions, Finn is forced to make some appalling choices. 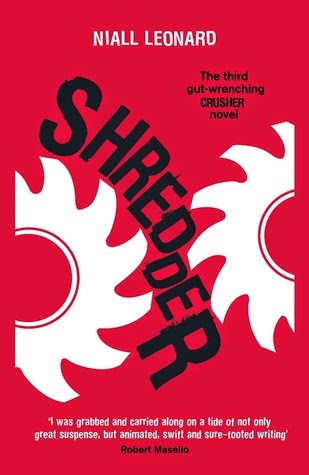 Review:
Warning: this book will leave your nerves in shreds!

This is the third book in the series about unlikely hero Finn Maguire.  Left in a dangerous predicament at the end of 'Incinerator', Finn has to try and save the girl he cares about while also attempting to extract himself from the growing feud between the Guvnor and the Turk - two of the most dangerous criminals you could ever have the misfortune to meet.

I have really come to admire Finn over the course of the series.  He relies on his wits and nerves but he also has an inbuilt survival instinct which always seems to see him remain intact even in the midst of the most precarious and potentially deadly situations.  He does take some punishment but he can also dish it out when needed!  Niall Leonard seems to revel in putting Finn in the path of danger and the plot fairly hurtles along as he struggles to always stay one step ahead.  I was on the edge of my seat the whole way through as I was extremely worried that he might get killed off.

Nerve wracking, tense and full of suspense there are so many nail-biting moments in 'Shredder' that I recommend you read it in one sitting.  I know that I couldn't put it down for even a second.  It's well plotted and peppered with so many unexpected surprises that there was a continuous sense of danger throughout the whole book.

And oh that ending!  I want to talk about it so much but my lips are sealed because I am absolutely determined not to spoil it for anyone but oh, Niall Leonard, you know how to put your readers through the wringer!

The Crusher series has been one of my favourites of late and I really don't want to say goodbye to Finn.  A brilliant set of books which will appeal to both male and female readers, I love how tough and gritty and exciting they are.