Sea of Shadows by Kelley Armstrong, published by Atom on 8th April 2014

Goodreads synopsis:
In the Forest of the Dead, where the empire's worst criminals are exiled, twin sisters Moria and Ashyn are charged with a dangerous task. For they are the Keeper and the Seeker, and each year they must quiet the enraged souls of the damned.

Only this year, the souls will not be quieted.

Ambushed by an ancient evil, Moria and Ashyn must race to warn the empire of a terrifying threat. Accompanied by a dashing thief and a warrior with a dark history, the sisters battle their way across a wasteland filled with reawakened monsters of legend. But there are more sinister enemies waiting for them at court - and a secret that will alter the balance of their world forever. 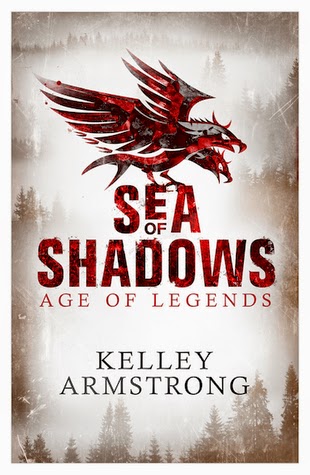 I stumbled across ‘Sea of Shadows’ in my local bookshop without even realising that Kelley Armstrong had a new book out.  It sounded intriguing and I thought the cover looked pretty striking so I picked it up.  I’ve enjoyed some of Armstrong’s books in the past but not all of them, so I wasn’t quite sure what to expect when I started reading this.  What I got was an exciting, action-packed fantasy adventure which started slow but then really picked-up and threw everything at the reader.  Strangely enough it reminded me a little bit of ‘Blood Red Road’ by Moira Young, although that may just have been because of the giant worms!
At the heart of the story are twin sisters Moria and Ashyn.  They are the Seeker and Keeper of Edgewood, charged with keeping the village safe from the angry souls of the dead that reside in the forest.  They have been trained from birth to fulfil their roles and each have an immortal creature by their side: a wildcat and a hound.  These animals are bonded to them and are like an extension of their own selves.  When things start to go wrong with the ritual of quietening the spirits, a terrible evil falls upon their village, leading Moria and Ashyn to embark on a dangerous journey.
The journey itself takes up the majority of the book but I found it incredibly exciting because it was fraught with danger at every turn.  There are a whole array of scary creatures which make appearances in the story and there are some seriously creepy moments which had me jumping out of my seat.  I think Kelley Armstrong does a great job of keeping readers on their toes with this part of the plot.  The sisters become separated on their journey but they are each accompanied by a potential love interest (although this isn’t necessarily how it starts out).  Personally, I really liked Gavril and I thought that the bond which grows between him and Moria was much more real than the lacklustre sparks between Ashyn and Ronan.
I was surprised by how much I enjoyed ‘Sea of Shadows’ and although it got off to a slow start it was well worth sticking with because it kept getting better and better and the second-half of the book in particular was fantastic.  I sometimes find that I can get a little lost with fantasy books but I thought that everything was explained extremely well and the world building was brilliant.  I’m now dying for the next instalment of this trilogy and I can’t wait to see what twists and turns are going to be thrown into book two.  This is probably my favourite Kelley Armstrong title so far!
Posted by Samantha (A Dream of Books) at 00:00