The Gathering Dark by Leigh Bardugo, published by Indigo on 7th June 2012

Goodreads synopsis:
Alina, a pale, lonely orphan, discovers a unique power that thrusts her into the lavish world of the kingdom’s magical elite—the Grisha. Could she be the key to unravelling the dark fabric of the Shadow Fold and setting Ravka free?

The Darkling, a creature of seductive charm and terrifying power, leader of the Grisha. If Alina is to fulfil her destiny, she must discover how to unlock her gift and face up to her dangerous attraction to him.

But what of Mal, Alina’s childhood best friend? As Alina contemplates her dazzling new future, why can’t she ever quite forget him? 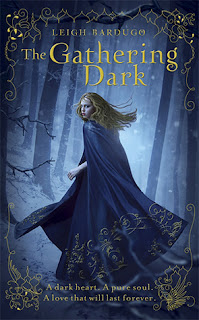 Review:
'The Gathering Dark' is the first book in a new trilogy which is set to take readers by storm!  It features an epic battle between light and dark, good and evil and at the heart of this lies the main character Alina whose power is far greater than she could ever have imagined.

The story is narrated by Alina and we see events through her eyes.  She undergoes a brilliant evolution throughout the book as she grows as a character.  She starts off uncertain about who she is and what her future holds but begins to understand more about herself as the story progresses.  She has a very special relationship with Mal, her childhood friend, which I loved and wanted to see more of.  There's also her connection to the powerful Darkling who I was mystified and intrigued about.

Leigh Bardugo has created a fantastic imaginary world with a hierarchy of magical people, many gifted with special powers.  Although the story does fall heavily into the fantasy genre, there is also action and romance and so much time has been spent crafting the characters that they seem very rooted in reality.

This book is very different to anything else I've read lately and has a highly original plot which had me captivated the whole time I was reading.  It is quite a long book at 442 pages, but as it was extremely fast-paced and exciting, I didn't notice except to wish at the end that it had been even longer so I could stay with the story and the characters as they took the next step on their journey.

This story will seep into your dream.  It's absolutely engrossing, magical and wonderful.  I can't wait for more!
Posted by Samantha (A Dream of Books) at 00:00