Slated by Teri Terry, published by Orchard Books on 3rd May 2012

Goodreads synopsis:
Kyla’s memory has been erased, her personality wiped blank, her memories lost for ever.

The government claims she was a terrorist, and that they are giving her a second chance - as long as she plays by their rules. But echoes of the past whisper in Kyla’s mind. Someone is lying to her, and nothing is as it seems. Who can she trust in her search for the truth? 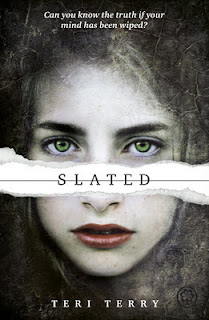 Review:
'Slated' is set in a future society where those who have committed wrongdoings have their memories wiped and are given a second chance to start over again.  Kyla is one of those who have been slated and sent to live with a new family.  However she soon discovers that remnants of her past are still lingering in her dreams and that she may be quite different to all those others who have left their pasts behind.

This is the debut novel from author Teri Terry and it is a dystopian thriller, guaranteed to keep you glued to your seat.  I was interested to read this one as soon as I heard about it because the premise of being able to begin a new life with no memories of the mistakes you have made was just so intriguing.

I enjoyed seeing how Kyla integrated with her new family and made the transition from spending nine months in hospital to being part of a household where she gained a mother, father and sister.  She basically has to re-learn how to do things as simple as doing the washing-up and getting out of a car.  I also liked her growing friendship with Ben, another slated teen.  They have a very honest and real connection and that was refreshing to see.

One of the things that I found really interesting about this book was the whole idea of a future society which reflects elements of the present world we live in - the fact that mobile phones are banned because they were used to organise demonstrations made me think of the London riots.  Plus the economic collapse and the coalition government all ring true today.  The slating is society's solution to dealing with people like the anti-government terrorists.

There are some huge shock revelations at the end of the book and you're left on a cliffhanger which means that I'm now dying to read book two, 'Fractured' which is coming summer 2013.  Such a long time to wait!