Goodreads synopsis:
Sadie Nathanson spends her life trying to survive the excruciating embarrassment of simply existing. It’s hard enough being a bit of a shrinking violet within a loud and outspoken extended family, but the unexpected card from ‘Dad’ on her 15th birthday is the last straw.

As ‘Dad’ was an Internet sperm-donor, it doesn’t take a genius to work out that this is a bad joke, probably set up by her ex-best-friend Shonna. But it starts Sadie wondering – just who was her father? Is he the cause of her worry crinkle and wonky bum? What would happen if she tracked him down?

So she decides to do just that. With help from her nerd cousin Billy, his friend Nodding Tony and a regular dose of ‘Haironomics’ (Sadie’s own hairstyle-related philosophy system), they uncover a lot more than they bargain for. 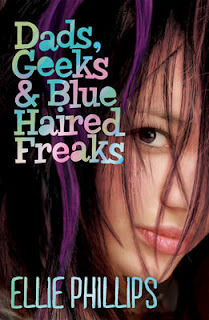 Review:
The premise of this book is interesting and tackled a subject that I hadn't really read about before.  On Sadie's fifteenth birthday she receives a card from her Dad.  An ordinary enough event except for the fact that Sadie doesn't know who her Dad is - he was a sperm donor.  So she sets out to track him down with the help of her cousin and his friend.  Sperm donation isn't a topic that you usually see featured in teen fiction but I like the fact that the author Ellie Phillips wasn't afraid to write about it.

Sadie's hunt for her biological father is touching and quite emotional at times.  She tries to track him down without the knowledge of her mother and with the very few clues she manages to find about his identity.  The whole subject is dealt with sensitively and I was intrigued throughout to see how it was going to be resolved.

Although the book could have potentially been quite heavy and serious, there is a light and fun undercurrent to the story.  Sadie herself is a sweet and humorous central character and has a passion for wild and wacky hairstyles.  In each chapter of the book she tries out a different hairstyle on herself and this was fun to see.

There were a few things that I thought were left slightly unresolved in the book and not explored in enough depth.  In particular, Sadie's friendship with Shonna which I felt was left as a bit of a loose end.  It would have been good to have seen a proper resolution to this.  I would also have liked more of a focus on Sadie and Tony who she has a bit of a flirtation going on with.  There can never be enough romance for me!

If you are looking for a contemporary novel with a difference then try 'Dad, Geeks and Blue Haired Freaks' which deals with a teenager trying to establish her own identity and find her place in the world.