Broken Dream by Eden Maguire, published by Hodder Children's Books on 3rd May 2012

Goodreads synopsis:
Tania’s film studies take her to New York City where she looks forward to getting lost in the anonymity of the big crowded bustling city. But Hell is all around and no place is safe as the Dark Angel’s relentless pursuit of dark souls continues.

But this time it’s more peronsal than it’s ever been before. When the Dark Angel sets its sights on Tania’s beloved Orlando it’s the final straw. Can Tania save his soul and her love? 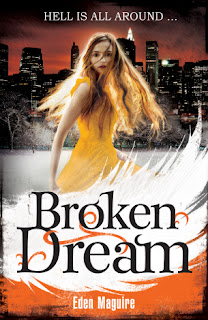 Review:
This is the third and final instalment of Eden Maguire's Dark Angel trilogy. The story started with Tania and her boyfriend Orlando experiencing life in New York.  It was nice to see them in a different setting and how this changed the way they interacted with each other.  I would have enjoyed seeing more of the sights and sounds of the Big Apple but a few chapters in they head back to their home town of Bitterroot.

Tania and Orlando become embroiled with a film crew shooting a new movie, which is the perfect opportunity for some new faces to be introduced, including the handsome but troubled actor Jack Kane and his wife Natalia, stunt double Charlie and his sister Gwen and lonely Maya.

I've always liked the central heroine Tania because she's quite a sympathetic figure and always tries to do the right thing.  She's quick to help her friends and family when they need her and I've enjoyed reading about her romance with the gorgeous Orlando.  Her psychic visions continue throughout this story, although they are unpredictable and difficult to interpret.

Although a big fan of these books, I've struggled at times with the predictability of the plots.  'Broken Dream' was a huge improvement because it nicely brought the story full circle and featured some characters from the first book 'Dark Angel' but also threw in some different tangents and twists to keep the tension and suspense high.  Although I had my own thoughts on how the series was going to end, I was never quite sure what was going to happen.

The whole series has been building to the moment when Tania will finally have to attempt to defeat her dark angel once and for all.  The climax when it came was well worth waiting for and it was an exciting and well plotted end to an extremely enjoyable series.

Overall this has been a fantastic trilogy about the battle between good and evil and light and dark and I've enjoyed Tania's struggle to overcome the odds and live a normal life.  I'm now waiting eagerly to see what Eden Maguire will write next!
Posted by Samantha (A Dream of Books) at 02:40