New Girl by Paige Harbison, published by Mira Ink on 4th May 2012

Goodreads synopsis:
Ever since I arrived at exclusive, prestigious Manderley Academy, that’s who I am. New girl. Unknown. But not unnoticed—because of her.

Becca Normandy—that’s the name on everyone’s lips. The girl whose picture I see everywhere. The girl I can’t compare to. I mean, her going missing is the only reason a spot opened up for me at the academy. And everyone stares at me like it’s my fault.

Except for Max Holloway—the boy whose name shouldn’t be spoken. At least, not by me. Everyone thinks of him as Becca’s boyfriend…but she’s gone, and here I am, replacing her. I wish it were that easy. Sometimes, when I think of Max, I can imagine how Becca’s life was so much better than mine could ever be.

And maybe she’s still out there, waiting to take it back. 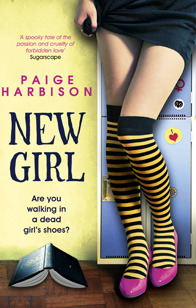 Review:
'New Girl' by Paige Harbison provides a clever twist on one of my all-time favourite books, 'Rebecca' by Daphne Du Maurier.  The action is set in a boarding school called Manderley where a nameless girl is about to start her senior year.  Although I wasn't sure if Harbison was going to be able to capture the magic of the original, she did a pretty good job of recreating some elements of the original but with her own spin.

The story is told through a dual narrative and is shared between the new girl (who as in Du Maurier's tale) is nameless until the very end, and the enigmatic Becca who has gone missing from the school.  This was a clever way of allowing the story to unfold because it provided first-hand insight into the new girl's experiences at the school, as well as some important flashbacks contrasting her with fun-loving and popular Becca.  The links between the two gradually became more obvious as the story progressed.

I really admired the courage of the main character being able to stand-up to those who bullied her and talked about her behind her back.  She could have gone home and admitted defeat but she didn't and actually ended up gaining a valuable experience and learning some important life lessons which put her whole future into perspective.

Some surprising revelations come to light about Becca and what really happened to her and I thought the author created a high level of suspense throughout surrounding the mystery of where she was.  I started off having one opinion about her character but this gradually changed as I learnt more about her and discovered insights into her personality and her past.

I definitely want to re-read 'Rebecca' again now and I hope this book inspires others who haven't come across it before to go and pick up a copy.  I never would have thought of transposing the plot onto a school setting so loved Paige Harbison's idea.  Although I didn't particularly connect with the characters and I'm not always a big fan of books about mean girls, I enjoyed the twist on a classic and found the story entertaining and on the whole enjoyable.
Posted by Samantha (A Dream of Books) at 00:00