Scarlet by A.C. Gaughen, published by Bloomsbury on 7th June 2012

Goodreads synopsis:
Posing as one of Robin Hood’s thieves to avoid the wrath of the evil Thief Taker Lord Gisbourne, Scarlet has kept her identity secret from all of Nottinghamshire. Only the Hood and his band know the truth: the agile thief posing as a whip of a boy is actually a fearless young woman with a secret past. Helping the people of Nottingham outwit the corrupt Sheriff of Nottingham could cost Scarlet her life as Gisbourne closes in.

It’s only her fierce loyalty to Robin—whose quick smiles and sharp temper have the rare power to unsettle her—that keeps Scarlet going and makes this fight worth dying for. 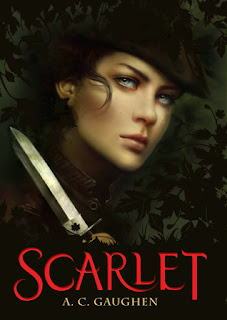 Review:
I am head over heels in love with this book!  I can't wait to start reading it all over again because it was incredible.  Being obsessed with all things Robin Hood, when I first head about it I was dying to get my hands on a copy.  When I actually started reading it I was well and truly hooked.  A.C. Gaughen should be congratulated for a new spin on a traditional tale and for the the tremendous storytelling skills which are on display in 'Scarlet'.

As I was reading it, I could picture the book being made into a television series because the setting and characters just came alive before my eyes.

What's different about this story to others about Robin Hood is that Robin actually takes a backseat for once to Will Scarlet - who just so happens to be a girl.  Whereas Hood is a name which resonates with people, Will Scarlet has always been his loyal friend and member of his band.  But here the story is narrated by Scarlet who is brave and as tough as any man and determined to help the people of Nottingham whatever the cost.  Scarlet's narrative voice was really distinctive and the way she spoke fitted perfectly with the era of the story.  I loved her straightaway - she is amazing!  There's a twist involving her near the end of the book which I honestly never saw coming and which made my jaw drop.

One of the reasons I am crazy about this book is because of the relationship between Scarlet and Robin.  Although she tries to deny it to herself at times, she's mad about him.  He makes her melt when he looks at her or talks to her in a certain way.  I loved the fact that there's such a noticeable spark between them and that their romance is allowed to slowly build and develop and yet doesn't overshadow the main storyline.  The two of them really made my heart flip over when they were together.

Other familiar faces in the book include Little John who is now a young man of eighteen, as well as a Much who remains loyal to Robin whatever the threat.  There are also those figures you love to hate, the Sheriff of Nottingham and Guy Gisbourne who you know are characters to fear.

I've been desperately trying to find out if there will be a sequel to 'Scarlet' because there's so much more to tell about this band of outlaws.  Although I still don't know for sure, I'll keep hoping that A.C. Gaughen has more up her sleeve because this surely can't be the end.

'Scarlet' is one of my favourite books of 2012 so far and I would highly recommend it.