Goodreads synopsis:
Callie lost her parents when the Spore Wars wiped out everyone between the ages of twenty and sixty. She and her little brother, Tyler, go on the run, living as squatters with their friend Michael and fighting off renegades who would kill them for a cookie. Callie's only hope is Prime Destinations, a disturbing place in Beverly Hills run by a mysterious figure known as the Old Man.

He hires teens to rent their bodies to Enders—seniors who want to be young again. Callie, desperate for the money that will keep her, Tyler, and Michael alive, agrees to be a donor. But the neurochip they place in Callie's head malfunctions and she wakes up in the life of her renter, living in her mansion, driving her cars, and going out with a senator's grandson. It feels almost like a fairy tale, until Callie discovers that her renter intends to do more than party—and that Prime Destinations' plans are more evil than Callie could ever have imagined. . . 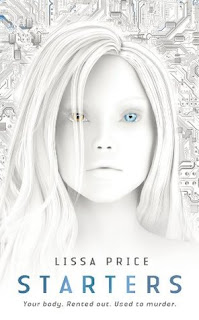 Review:
Dystopian novels are huge at the moment which I'm personally really pleased about because I'm a massive fan of books which imagine what the world will be like in the future.  Lissa Price has a particularly frightening vision of the future in her debut novel 'Starters'.  This is one environment that I would not want to be a part of!

After the spore wars, everyone between the ages of twenty and sixty ended up dead - unable to get the precious vaccine which spared the lives of teens (Starters) and the elderly (Elders).  Without their parents to keep them safe and protected, some young people have had no choice but to live on the streets, facing potential dangers alone.  The main character Callie is determined to look after and provide for her younger brother Tyler which leads her to Prime Destinations.  A facility offering to pay a huge sum of money for Starters to rent out their bodies.  The whole idea of Prime Destinations was creepy and chilling.  I can't imagine how you would feel knowing that someone else was going to be walking around in your body.

I thought the whole plot was incredibly original and beyond intriguing.  I didn't have a clue what was going to happen to Callie who abhorred the concept of renting your body but who desperately needed the money for herself and her brother.  There are elaborate rules in place about what Enders can and can't do in these bodies but just hearing about some of these things made the situation seem even more terrifying.

The tension was kept high throughout the book - no one was really who they seemed to be, so you couldn't tell who to trust and who to be wary of.  There was also a huge twist near the end which completely threw me for a loop.

I would have liked to have seen Callie's relationship with Michael explored a little more, as I felt that the only thing missing from this book was the romantic element which I usually look for.  It may be though that there will be more of a focus on this in the next book in the series.