Review: Whatever Love Is - Rosie Rushton

Whatever Love Is by Rosie Rushton, published by Piccadilly Press in April 2012

Goodreads synopsis:
When Frankie Price goes to live with her wealthy cousins, she finds herself part of a social scene that she’d only read about in magazines.

Shy and overwhelmed, she retreats into her own passion: writing – pouring out her feelings into her short stories.

But when the entire family is rocked by scandal, and her mate Ned comes under the spell of the beautiful but manipulative Alice, Frankie realises that she has to fight for the life she wants. 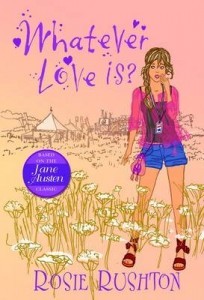 Review:
This is a modern-day version of Jane Austen's classic 'Mansfield Park'.  It will introduce Austen to a whole new audience and for those that already love the original you'll want to rush off and grab your well thumbed copy for a re-read (which is exactly what I did!).  I really liked all the fitting quotes from 'Mansfield Park' at the start of every chapter which gave a tantalising glimpse of what lay ahead.

The setting has been updated to Thornton Parslow in Northampton, where our heroine Frankie Price goes to live with her rich cousins.  Frankie is head over heels in love with her cousin Ned but he doesn't seem to treat her as anything other than an honorary younger sister.  Although the heart of the story is Frankie's unrequited love for Ned, it is also about the importance of family, as well as containing a serious message about social issues.

The storyline was engaging and even though I knew the plot from the original and guessed how some parts of the story were going to work out, I was still glued to the pages of this brilliant book.  I did think however that the ending slightly short-changed readers, as the resolution between Ned and Frankie was a bit rushed and over all too quickly.  All of that build-up and then no big romantic moment?!

What's great about this series is that Austen may have been writing so many years ago but her stories still resonate with different generations and have so much relevance today.  Rosie Rushton has managed to provide a fresh twist and has given new life to Austen in her wonderful interpretation of a beloved classic.  I'm sad to see that this is the last book in the series because they've all been such great reads.