The Hunt by Andrew Fukuda, published by Simon and Schuster on 10th May 2012

Goodreads synopsis:
Against all odds, 17-year-old Gene has survived in a world where humans have been eaten to near extinction by the general population. The only remaining humans, or hepers as they are known, are housed in domes on the savannah and studied at the nearby Heper Institute. Every decade there is a government sponsored hunt. When Gene is selected to be one of the combatants he must learn the art of the hunt but also elude his fellow competitors whose suspicions about his true nature are growing. 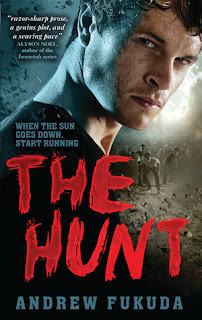 Review:
'The Hunt' is a truly terrifying and electrifying read from debut author Andrew Fukuda.  Having heard a lot about this book prior to publication I had a feeling that I was going to love it and love it I did.  Scary, sinister and incredibly exciting, this is a story which will appeal strongly to both a male and female teen audience.  There's something for everyone, danger and scares, a touch of romance and a plot which will have you gripped.

Seventeen year old Gene lives in a future world where humans are practically extinct.  Near the start of the story he is selected to take part in a government sponsored hunt.  But this is a hunt with a difference because the prey consists of a group of humans (or hepers as they are known).  For most, this would be an honour but Gene isn't just anyone.  He's hiding a big secret which if exposed during the hunt could end up costing him his life.

Although Fukuda never mentions the word vampire in the book, you can only put all the clues together - can't go out in the sun, sleep upside down, long nails and fangs, and come up with one outcome.  The fact that the population are never named but their unusual characteristics and traits are discussed in detail, actually made them seem even more sinister, if that's possible.

What I found even more scary about the story was the constant struggle for survival that many of the characters face.  You never know when someone is going to meet a particularly nasty end and the tension in the book is palpable.  No one is safe and I got the feeling that Fukuda would not be afraid to kill off one of the main characters if it benefited the story.  That meant that I was constantly worried about my favourites surviving until the end of the book.

A jaw dropping revelation on the final page had me extremely anxious for more - so please Andrew Fukudua, don't keep us in suspense for too long!