The 100: Homecoming by Kass Morgan, published by Hodder on 26th February 2015

Goodreads synopsis:
Weeks after landing on Earth, the Hundred have managed to create a sense of order amidst their wild, chaotic surroundings. But their delicate balance comes crashing down with the arrival of new dropships from space.

These new arrivals are the lucky ones - back on the Colony, the oxygen is almost gone - but after making it safely to Earth, GLASS's luck seems to be running out. CLARKE leads a rescue party to the crash site, ready to treat the wounded, but she can't stop thinking about her parents who may still be alive. Meanwhile, WELLS struggles to maintain his authority despite the presence of the Vice Chancellor and his armed guards, and BELLAMY must decide whether to face or flee the crimes he thought he'd left behind.

It's time for the Hundred to come together and fight for the freedom they've found on Earth, or risk losing everything - and everyone - they love. 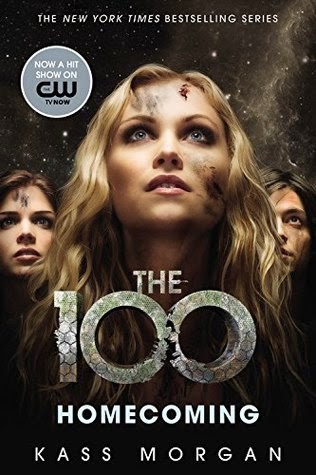 Review:
This is the third and final book in The 100 trilogy.  I absolutely love this series so I delved straight into the opening chapter as soon as the book arrived.  I devoured it in one sitting too!  It was sooo good and a brilliant ending to what has been a fantastic adventure.  Everyone's stories were concluded properly and no loose ends were left which always drives me mad.  Although I am a massive fan of these books, I haven't actually been watching the TV series...yet.  I have all the episodes recorded but I didn't want to watch them until I had finished reading the books.  I'm now going to have a huge catch-up weekend.  It will be interesting to see if I like the same characters when I see them on TV and whether much of the plot has been changed.

The story itself picks up where 'Day 21' left off.  The colony is on it's way to earth in the remaining drop ships and the 100 have to adapt again when they arrive and immediately begin to disrupt their carefully ordered existence.  Once again, Morgan shows us all the key players - Glass, Clarke, Wells and Bellamy, and how they cope with the adults arrival.

My favourite couple has always been Glass and Luke, so I was desperately rooting for them.  I wanted them to get their happy ever after, particularly in light of all they had gone through to get to earth.  Clarke, Wells and Bellamy also have their own challenges to face and I enjoyed following them on their journeys.  They have had to do a lot of growing-up in a short space of time but they have matured and changed a lot since we were first introduced to them.

Exciting action and adventure is driven at a relentless pace in this final instalment.  The various factions get the opportunity to face off against each, as the battle for survival reaches a climatic finish.  I have really enjoyed the different settings in the series and seeing how all the characters have managed to survive both in space and in a foreign and unknown environment.  Brilliant from start to finish, I would highly recommend this series.
Posted by Samantha (A Dream of Books) at 00:00