Review: The Wondrous and the Wicked - Page Morgan

The Wondrous and the Wicked by Page Morgan, published by Hot Key Books on 7th May 2015

Goodreads synopsis:
Ingrid Waverly has never been more alone, or more frightened. Her sister has fled to London in fear for her life, and Luc, the one person she thought she could rely on more than anyone else in the world, has also disappeared. No one will tell Ingrid where he has gone, but rumours of a fierce leadership battle amongst the supernatural forces who protect Paris are swirling, and Ingrid fears he has been forced into a dangerous position.

And it is a dangerous time to be a leader in this city - the number of demons flooding Paris's streets are overwhelming, and Ingrid and her few allies cannot cope. All the signs point to some kind of final uprising from the Underworld - but how can it possibly be defeated when the only people who stand a chance of doing so are too busy fighting themselves? Once again, everything comes down to Luc and Ingrid, and whether they can draw on each other's strength as well as their own. And this time, love really must conquer all. 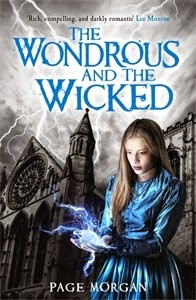 Review:
'The Wondrous and the Wicked' is the third and final part of Page Morgan's gothic gargoyle trilogy, set amidst the streets of Paris.

The Waverly siblings have already endured so much and faced loss, pain and heartache.  I wasn't sure what more could possibly lie in wait for them.  In this concluding book, they each have their own personal challenges to face before they can have any chance at the lives they really want.  Separated geographically, they are caught in the middle of a dangerous power struggle with heavy stakes.

Page Morgan quickly gets readers up to speed with what happened in the previous instalments.  I was thankful of a speedy recap because it's been a while since I read this series.  It actually reminded me of just how much drama and action had taken place so far.  Everything is still to play for.

My favourite character in the series has always been Gabby, the feisty and brave younger sister.  At the beginning of the book she has been sent to London for her own protection.  I knew however, that she would still find her way back into the middle of the action.  Gabby isn't one for just sitting on the side-lines.  I have loved the growing romance between her and Nolan, which I'm pleased to say gets even better.  There are some really fantastic scenes between the two of them.

Ingrid and Luc's romance is played out too with Vander and Luc still vying for Ingrid's heart.  I won't reveal which one wins the girl in the end but I'm sure readers of the series will be more than satisfied.

This is definitely a very underrated series which I'm pleased to say I have really enjoyed.  I've loved all the gothic and supernatural elements and the wonderfully dark setting of historic Paris where anything could be (and frequently is!) lurking in the sewers.
Posted by Samantha (A Dream of Books) at 00:00