Saint Anything by Sarah Dessen, published by Penguin on 5th May 2015

Goodreads synopsis:
Peyton, Sydney's charismatic older brother, has always been the star of the family, receiving the lion's share of their parents' attention and—lately—concern. When Peyton's increasingly reckless behavior culminates in an accident, a drunk driving conviction, and a jail sentence, Sydney is cast adrift, searching for her place in the family and the world. When everyone else is so worried about Peyton, is she the only one concerned about the victim of the accident?

Enter the Chathams, a warm, chaotic family who run a pizza parlor, play bluegrass on weekends, and pitch in to care for their mother, who has multiple sclerosis. Here Sydney experiences unquestioning acceptance. And here she meets Mac, gentle, watchful, and protective, who makes Sydney feel seen, really seen, for the first time. 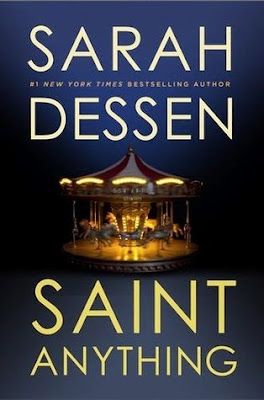 Review:
I was incredibly excited to hear about a new Sarah Dessen book.  I'm a big fan of hers and associate her with stories about summer, growing-up and relationship dramas.  'Saint Anything' ticked two out of three of those boxes.  This definitely wasn't my favourite Dessen novel, I think partly because of the characters and partly the storyline itself, but it was still pretty great and dealt with some powerful subjects.

The book starts with the main character Sydney recounting the story of what happened to her older brother Peyton.  There's a lot of hero-worship mixed in with new feelings which have surfaced in relation to his behaviour.  I could empathise with the situation she felt in and the fact that she believed herself invisible to her parents.  They were consumed with trying to help her brother and make sense of his situation and Sydney feels pushed to the side-lines.  There's no doubt that she loves Peyton but she understandably also experiences a sense of guilt about the anger she has towards him.  The brother-sister bond is one which Dessen explores a lot in this novel and that was one of my favourite elements of the book.

When Sydney starts at a new school, she meets Layla and her brother Mac.  Being part of their group, helps Sydney to understand where she fits in and their friendship is the catalyst for her finally starting to get her own life together.  I particularly liked Layla, especially the way she takes Sydney under her wing and the way she freely offers her hand in friendship without any strings attached.  For some reason and I can't quite put my finger on why, I wasn't as keen on Mac which is a shame because normally I love the male protagonists in Sarah Dessen's books.  He had lots of great qualities but I just didn't fall in love with him.
A lot of heavy and serious themes are touched upon in 'Saint Anything' and I thought that these were all explored in such a way as to really make the reader think about what they would do in the same situations.  There are no right or wrong answers but it came across that everyone has to do what they personally feel is right, rather than trying to conform to what someone else thinks they should do or how they should act.

Sarah Dessen's books always feature stand-out writing and this was no exception but I found the pace a little slow at times and the romance felt a bit flat.  I would still recommend giving this one a go but there are other titles by her that I personally have enjoyed more.
Posted by Samantha (A Dream of Books) at 00:00