Review: All Fall Down - Ally Carter

All Fall Down by Ally Carter, published by Orchard Books on 5th February 2015

Goodreads synopsis:
Grace can best be described as a daredevil, an Army brat, and a rebel. She is also the only granddaughter of perhaps the most powerful ambassador in the world and Grace has spent every summer of her childhood running across the roofs of Embassy Row.

Now, at age sixteen, she's come back to stay - in order to solve the mystery of her mother's death. In the process, she uncovers an international conspiracy of unsettling proportions, and must choose her friends and watch her foes carefully if she and the world are to be saved. 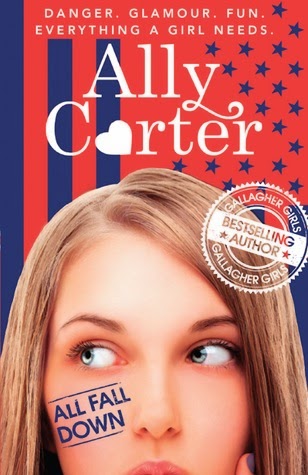 Review:
'All Fall Down' is the first in a brand new series from the author of the Gallagher Girls books.  This was one of my most hotly anticipated titles of the year and it did not disappoint.  Like all of Ally Carter's books, it was fast-paced, suspense driven and exciting with a typically plucky female protagonist and a whole cast of other fab characters.  I really loved it and I can't wait for the next book in the Embassy Row series.

The story centres around teenager Grace who goes to live with her Grandfather in the US Embassy, based in Adria.  Grace is haunted by the death of her mother three years before and vehemently believes that she was murdered, rather than having died accidentally in a fire.  No one will believe her, so she sets out to prove them wrong.

I really loved Grace.  Ally Carter's characters are always fantastic but I clicked with Grace from the very beginning.  She is driven, brave and isn't afraid to take risks.  She is not someone who will give up easily and she is undeterred by the people around her who are trying to stop her from pursuing her mother's death.  Her single-minded mission is dangerous but Grace seems to thrive on getting herself out of sticky spots.

There is a great cast of secondary characters in the story too.  Megan, her new best friend Noah and Rosie were all brilliant.  It reminded me of the Gallagher Girls series where they all come together to watch each other's backs and protect one another.  I desperately want to see more of Alexei too, the Russian boy next door, who could be a potential love interest.  He came across as pretty mysterious, so I'm looking forward to a few of his secrets being spilled.

I thought the setting was very unique too with the story taking place in and out of a whole row of international embassies.  The plot was fantastic and there were lots of twists and turns which kept me on my toes.  A mega twist and a big reveal at the end, left me in no doubt that I would be grabbing the second book as soon as it's published.
Posted by Samantha (A Dream of Books) at 00:00