Synopsis:
The small Connecticut town of Sanctuary is rocked by the death of its star quarterback. Daniel's death looked like an accident, but everyone knows his ex-girlfriend Harper is the daughter of a witch - and she was there when he died.

Then the rumours start. When Harper insists Dan was guilty of a terrible act, the town turns on her. So was his death an accident, revenge - or something even darker?

As accusations fly and secrets are revealed, paranoia grips the town, culminating in a trial that the whole world is watching . . . 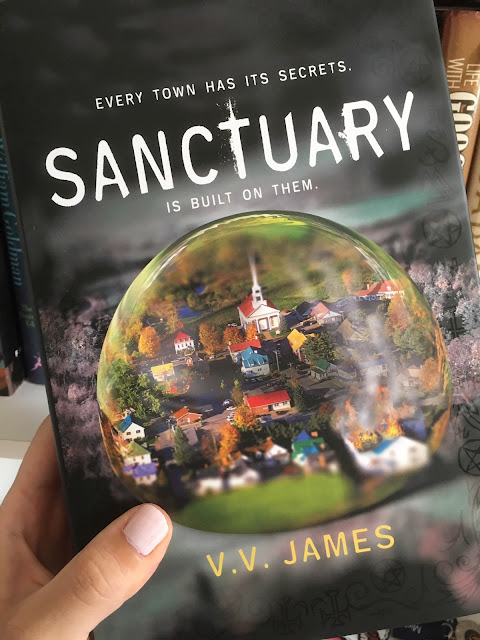 Review:
When I first heard about this book I knew immediately that I wanted to read it. I'm a big fan of the author's previous YA Dark Gifts trilogy, written under the name Vic James and I love her writing, so I added 'Sanctuary' to my wish list straight away. It turned out to be a really refreshing read because it felt so unique and original and unlike anything else that I'd read recently.

Described as Big Little Lies meets The Craft, 'Sanctuary' takes the reader on a journey where you never quite know where you are going to end up. Each chapter was full of surprises and there were lots of unexpected twists in the story that I didn't see coming. I loved the sense of anticipation I felt while reading it and the fact that I literally had no idea what was going to happen next. The story and the characters really hooked me in and kept me turning the pages well into the night.

The story is set in the small town of Sanctuary where modern day witch craft is still alive and well. No longer hidden away or shunned by those who fear it, local woman Sarah is a practicing witch who has helped many of the residents of the town with their day to day problems. Her coven consists of her closest friends who lend energy to her spells and with this ability Sarah has helped to change for the better, the lives of those around her. Devoted to her teenage daughter Harper, her only sadness is that Harper has not inherited her abilities.

The catalyst which drives the plot on, is the death of the local star quarterback. Daniel was the son of one of her closest friends, Abigail and his death is the spark which causes everything to start to unravel. Soon Sarah's daughter Harper is under suspicion for his death and the local community start to turn against the witch who lives among them.

The narrative unfolds from the perspectives of Sarah, Harper, Abigail and Maggie. The latter is a detective who is assigned to investigate Daniel's death and determine what really happened to him. Was his death a tragic accident or did someone kill him? I enjoyed seeing events happen through the eyes of different characters who each have their own view on the events of both the present and the past. As the story picks up pace, there are hints about something terrible that happened years ago and which has been kept secret until now. I couldn't wait to find out what it was and I loved the way V.V. James teases us with it until near the end of the book when suddenly I had quite a change of heart about many of the characters in light of this revelation.

The witch craft element to the story was written brilliantly. It felt entirely plausible that magic could still be employed to sort out modern day problems and also that people would eventually turn against something that they couldn't fully understand or comprehend. Sarah becomes the scapegoat for the town and it was scary to see how quickly things escalated near the end of the story. I literally couldn't put the book down!

'Sanctuary' was a gripping read with an intriguing mystery at it's centre. I thoroughly enjoyed it and loved the way that it incorporated so many different genres. I wouldn't hesitate to recommend this book to other readers.
Posted by Samantha (A Dream of Books) at 00:00