Synopsis:
When Lacey Chu wakes up in a hospital room with no recollection of how she got there, she knows something is up. But with her customizable smart pet, Jinx, missing in action and Moncha, the company behind the invention of the robot pet, up to something seriously sinister, she’s got a lot of figuring out to do. Lacey must use all her engineering skills if she has a chance of stopping Moncha from carrying out their plans. But can she take on the biggest tech company in North America armed with only a level 1 robot beetle...? 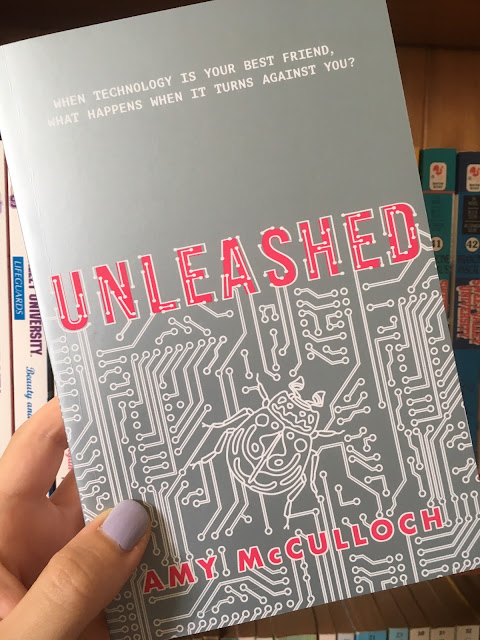 Review:
'Unleashed' is the second part of Amy McCulloch's brilliant duology which began last year with 'Jinxed'. I was very excited to read this and I wasn't disappointed! It was great to return to the world of Monchaville and to see all my favourite characters again.

If you haven't yet read 'Jinxed' then I would strongly suggest doing so before starting this one. Everything will make a lot more sense to you in terms of the futuristic setting. Basically, society has now evolved to the point that instead of smart phones, everyone has a baku. This is essentially an innovative smart device which is leashed to its owner and comes in the form of different animals. A basic level 1 baku will typically be an insect such as a beetle or a butterfly, a level 2 baku could be a dormouse and they get increasingly more sophisticated in size and technology as the levels go up. The Bakus are designed to make life easier for their owners and so are able to screen messages, display maps, provide entertainment and communication and basically see to their owners every need. I actually think they sound incredible, although it's slightly scary to think that we might not be as far from this kind of technology becoming real as we first assume.

The story picks up a month on from where the previous book left off. The main character Lacey Chu wakes up in a hospital bed with no idea of how she got there or what happened to her. The only thing she does know is that her scarab beetle Slick is acting suspiciously and Jinx is missing. It's a good thing that she has Team Tobias by her side to help work out what's going on. Not everything in Monchaville is as it seems and as Lacey and co begin to connect the dots, it seems that something sinister is brewing behind the scenes.

I love the fact that McCulloch depicts a strong female protagonist with seriously good STEM skills. Lacey is an incredible engineer and her ingenuity and tech know-how ultimately help to save the day. This is an area in which teenagers really are the future as they innovate, design and develop some amazing new technology that we may well be using sooner than we think.

Lacey is on a crusade to figure out what is really going on with Moncha Corp and why they are so desperate to get their hands on Jinx. I really enjoyed seeing her and Team Tobias work together to investigate Moncha and the disappearance of their founder Monica Chan. They work like a well-oiled machine and there is no doubt that they have each other's backs. It was great to see more of Lacey's friend Zora in the book too as she has some wicked coding skills.

'Unleashed' unfolds at a fast and furious pace which I think is probably slightly due to the fact that this is a duology and not a trilogy. There's no slow middle book to get in the way, just a whole lot of action and excitement to keep the reader immersed in the story. There are lots of shocks and surprises along the way and I was often on the edge of my seat. I couldn't wait to find out what was going to happen to Lacey, her friends and family and I was hooked until the very last page.

Only problem now is that I really want a baku of my own!