Synopsis:
The Dragon Lord of Dunark is ruthlessly hunting down Shamers and burning them at the stake. He must be brought down, and so a rebellion is formed.

Rebellions need leaders, and what better choice than the legitimate heir to Dunark, Dina's friend Nico? Nico is reluctant to kill even a rabbit. Still, Dina's considerable powers should help him triumph over the Dragon Lord. But Nico knows only too well that heroes have a nasty habit of ending up dead . . . 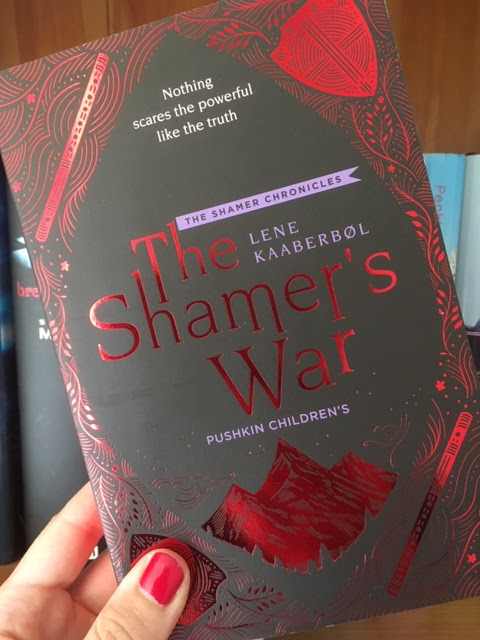 Review:
'The Shamer's War' is the epic final book in this truly stunning fantasy series. Now that Pushkin Press have republished Lene Kaaberbol's series in full, I really hope that they get the acclaim they deserve in the UK. This is definitely a series that has flown under the radar so far but it's ridiculously good and is definitely one that I wouldn't hesitate to recommend. I'm quite sad that the journey is over now as I've enjoyed enormously reading the books and following the characters on all their adventures.

The final instalment picks up Nico's storyline, as the book builds towards a showdown between Nico and his cousin Drakan. This is something that I've been anticipating and waiting for from the very beginning. It's been simmering away in the background all the time, so it was great to see Nico finally step up and determine to do something to save his people from further bloodshed and loss of life. Plus, as my favourite character, I loved seeing him more involved and active in the central plot.

Dina is right by Nico's side, as she has been from the beginning. I really adore the bond that the two of them share. Although she's younger than him, I always thought I could detect a slight romantic undercurrent between them but I think their relationship has developed more into big brother, little sister. Dina has some difficult choices to make in the book. She now has two gifts: the Shamer's gift and the Serpent gift. She is torn between them and feels like she's lost her path. However, Dina learns a lot about who she is, where she fits and her role in her family. She has always been brave and courageous and those qualities really come to the fore.

The narrative is once again shared between Dina and her brother Davin, who also gets a pretty epic storyline. His character has developed a huge amount since 'The Shamer's Daughter' and it was great to see the arc and the journey that he has been on. He is still suffering after his experience in the Hall of Whisperers but he hasn't lost his overwhelming need to protect the people he loves. There's a touch of romance for him too which I really enjoyed, as I wanted him to find someone special.

Forces converge in the book to bring all the characters together, leading to a nail biting ending which had me on the edge of my seat. The conclusion was actually quite unexpected and Lene Kaaberbol managed to throw in a few last twists to surprise me. I would be so happy if this series could go on and on as I think there's potential for so much more. It's sad to think that I've got to the end of this exciting adventure and it's all over now. However, Dino and co will live on long in my memory and I look forward to rereading the entire series at some point in the future.

If you have enjoyed reading this review and would like to buy the book, please consider purchasing via my affiliate link from Amazon.