Review: A Dress for the Wicked by Autumn Krause

Synopsis:
Nothing much happens in the sleepy town of Shy in Avon-upon-Kynt. And for eighteen years, Emmaline Watkins has feared that her future held just that: nothing.

But when the head of the most admired fashion house in the country opens her prestigious design competition to girls from outside the stylish capital city, Emmy’s dreams seem closer than they ever have before.

As the first “country girl” to compete, Emmy knows she’ll encounter extra hurdles on her way to the top. But as she navigates the twisted world of high fashion she starts to wonder: will she be able to tailor herself to fit into this dark, corrupted race? And at what cost? 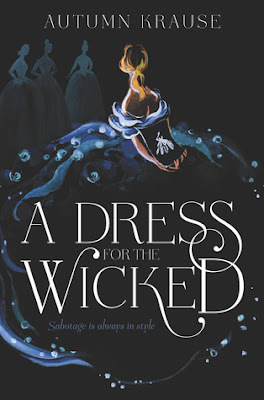 Review:
Autumn Krause's debut novel 'A Dress for the Wicked' combines both fashion and politics in the fictional city of Avon-upon-Kynt. I have to admit that the first thing that attracted me to this book was the luscious cover. The artwork is simple but striking and oh so pretty. It really made me want to pick it up and start reading.

The setting of the book is based on aspects of Victorian London with its class structure and rules of etiquette. It doesn't however fit within the historical fiction genre. I find it quite hard to say exactly which genre I would slot it into, as it combines so many different elements: historical, fantasy and even dystopia. There is a strong political undercurrent running throughout the story. The main political party in the book are the Reformists Parliament Party, who every year grant an arts budget to the Crown. The Crown then pass on a large portion of this to the Fashion House which is run by the inimitable Madame Jolene. The Reformists now want to cut the arts budget and create cheaper fashions but there is a lot of opposition to their plans.

The main character in the story is Emmaline Watkins or Emmy as she is known, who gets a place in the prestigious Fashion House competition. She gets the chance to compete against a number of other girls to become a design apprentice - a position that she aspires to. Emmy becomes the token 'girl from the country', with no one expecting her to rival the other competitors, who are more privileged and well connected. She does not know who she can trust and does not even appear to have the support of her Publican mother, who has remained behind in Shy.

The plot reminded me a little bit of 'The Hunger Games' but with dresses and definitely not as deadly. There are however high stakes involved with each girl having different reasons for taking part that are gradually revealed throughout the story. I did find the start of the book much slower than I was expecting and it took me a good few chapters before I got used to the style and rhythm of the writing. It definitely improved as the story progressed and I found myself enjoying it more and more. There is a lot about fashion in the book which wasn't something that particularly appealed to me, although it was interesting to see Krause's take on using fashion to reveal the character and personality of the main players. I also liked the way that she provided a nod to the real fashion world, with her imagining of what the first fashion show could have looked like.

This was a book that started with a slow burn but really grew on me. I thought that there was a lot of interesting character development in the second half and even some romance to keep me happy. After reading the ending, I assumed that there was going to be a book two to look forward to but I believe that currently this is a standalone novel. I do hope that Autumn Krause gets to return to the world of Britannia Secunda and the district of Avon-upon-Kynt because I would really like to know what happens to Emmy next.

If you have enjoyed reading this review and would like to buy the book, please considering purchasing via my affiliate links from Amazon or the Book Depository.
Posted by Samantha (A Dream of Books) at 00:00