Synopsis:
After narrowly escaping the fall of Rossarb, Princess Catherine leads a rag-tag group of survivors into the barren wasteland of the Northern Plateau.

With the Brigantine army snapping at their heels, Edyon and Ambrose become separated from the group, while demon hunter Tash leads Catherine and March to an unlikely refuge - the hidden tunnels of the demon world itself. They soon find that the tunnels hold their own dangers and, while Tash travels deeper, hoping to learn more about their mysterious inhabitants, Catherine and March must return to the surface to resume the war.

But the world above is in turmoil. King Aloysius's army has captured the Pitorian prince, Tzsayn, and is poised to overrun the whole country. To have any hope of challenging her father's tyranny, Catherine needs to form her own army, but when danger lurks at every turn, how can she tell an ally from an enemy? What Tash discovers in the demon tunnels could change everything, but if the message doesn't reach Catherine in time, the war might already be lost . . . 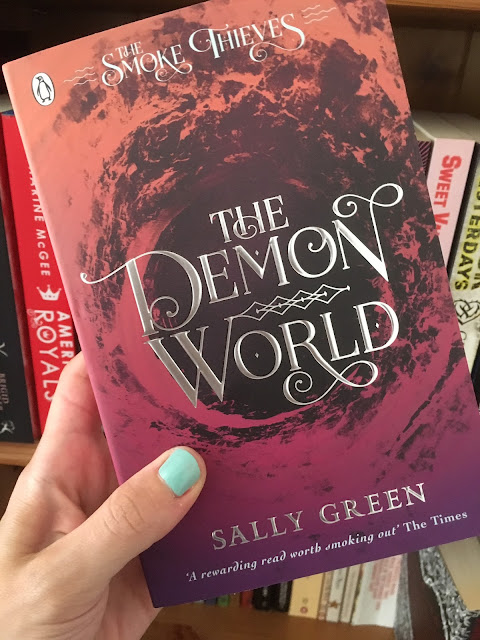 Review:
'The Demon World' by Sally Green is the follow-up to last year's 'The Smoke Thieves'. I had a rocky relationship with the first book in this fantasy series. There were some aspects of the plot that I really enjoyed and it definitely finished on a high note but I had issues with the use of multiple narrators making the story feel slightly disjointed and the overall slow pace of the book. I therefore approached the sequel with some trepidation, although I was intrigued to see how Green was going to continue the characters' stories.

The book picks up immediately after the events of 'The Smoke Thieves', with the characters fleeing to the Northern Plateau - demon country. As the group end up being separated from each other, the story divides as each person has a different path they must follow. It took me a little while to recollect everything that had happened in the previous book but soon I was back up to speed and sucked into Green's world. Once again, I particularly enjoyed seeing the stories of Catherine and Tash unfold as they are my favourite two characters in the series. I like strong, female heroines and both of these women are on challenging journeys but still manage to stand tall amidst the chaos. I found myself really looking forward to their chapters in the book and getting impatient when the focus switched to some of the others. Now that I'm more familiar with all the characters in the series though, I did find that the narrative was less disjointed and flowed a lot more smoothly.

The action was constant throughout the book and the pace rocketed along, drawing the reader in for the ride. Green keeps you wanting more with clever storytelling and lots of carefully placed surprises along the way. There were several times when I was wrong-footed by the characters or by plot twists but that made the book even more fun to read.

The ending of 'The Demon World' was shocking and the book finished on a big cliffhanger. It feels impossible to have to wait to find out what happens next but that's exactly what readers will have to do. Roll on book three in the series!
Posted by Samantha (A Dream of Books) at 08:10