Review: The Last Voyage of Poe Blythe by Ally Condie

Synopsis:
Poe Blythe, the seventeen-year-old captain of the Outpost's last mining ship has revenge on her mind as she and her crew voyage up the Serpentine River in search of gold. But there is something Poe wants even more than gold, however - to annihilate the river raiders who, two years ago, killed the boy she loved.

As Poe navigates the treacherous waters of the Serpentine and realizes there might be a traitor among her crew, she must also reckon with who she has become, who she wants to be, and the ways love can change, even and especially when you think all is lost. 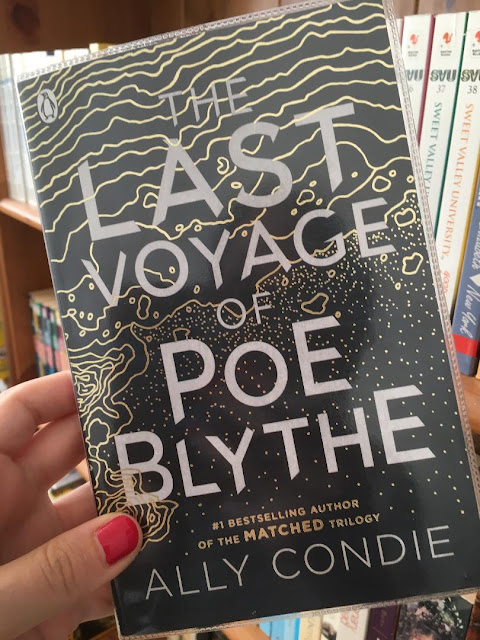 Review:
I've read all of Ally Condie's previous books and 'The Last Voyage of Poe Blythe' featured heavily on my list of the 2019 new releases I was looking forward to reading. It sounded intriguing and my interest was piqued by the thought of a dystopian adventure set at sea and featuring rival factions who are fighting over gold. That's pretty much what was delivered and on the whole I enjoyed Condie's latest offering.

The majority of the story is set on-board the Gilded Lily - a ship captained by Poe Blythe. The ship's mission is to dredge the Serpentine River of gold and return it to The Outpost, where it will be delivered into the hands of the Admiral. Poe has always followed orders in the past but this time she wants revenge on the river raiders who killed the boy she loved and was planning to escape with. She has designed a wicked and deadly set of armor to protect the ship and is determined to make the raiders pay for what they took from her. It's a unique and inventive story concept which kept me glued to the pages as Poe's journey unfolds.

The pace was a little slow at the very beginning of the book but then the sense of adventure kicked in and I could almost sense the motion of the ship, the claustrophobia of the crew and the smell of the sea. Anything vaguely pirate related and I'm there, so this was an aspect of the story that I particularly enjoyed.

The one thing that I thought was missing a little bit from the book was more insight into some of the characters. As the main protagonist, the story revolves around Poe who was a character that I greatly liked and admired. She is stubborn and tough, incredibly brave and not used to letting people in. She does however learn how to rely on others for support when she is given a new crew to take with her on her mission. I would have loved to have known more about some of the secondary characters. Her second-in-command Brig was quite a dark horse, who Poe is never quite sure if she can trust or not. I wanted to know more about him as a person and his past. Part of me wonders if this was a deliberate choice by Condie because it means that like Poe, the reader is never sure either who can be trusted on the ship and who is attempting to sabotage the mission and help the raiders.

As far as I'm concerned, the ending tied up some but not all of the threads of the story. So while, I believe that this is currently a stand-alone, I would not be surprised to see Condie return to this world and these characters. I'll definitely be along for the journey.

If you have enjoyed reading this review and would like to buy the book, please consider purchasing via my affiliate links from Amazon or the Book Depository.

And if this sounds like a book you would enjoy, then why not watch the official trailer: