Synopsis:
Kidnapped as a young girl, her psychic powers harnessed by a madman, Memory lives a caged and isolated existence . . . until she comes face-to-face with a wolf. Labelled an empath by her bad-tempered rescuer, Memory knows that her 'gift' is nothing so bright. It is a terrible darkness that means she will always be hunted.

But Memory is free now and she intends to live. A certain growly wolf can just deal with it. Alexei prefers to keep his packmates at bay, the bleak history of his family a constant reminder that mating, love, hope is not for him. But Memory, this defiant and fearless woman who stands toe-to-toe with him awakens the most primal part of his nature - and soon, he must make a choice: risk everything or lose Memory to a murderous darkness that wants to annihilate her from existence . . . 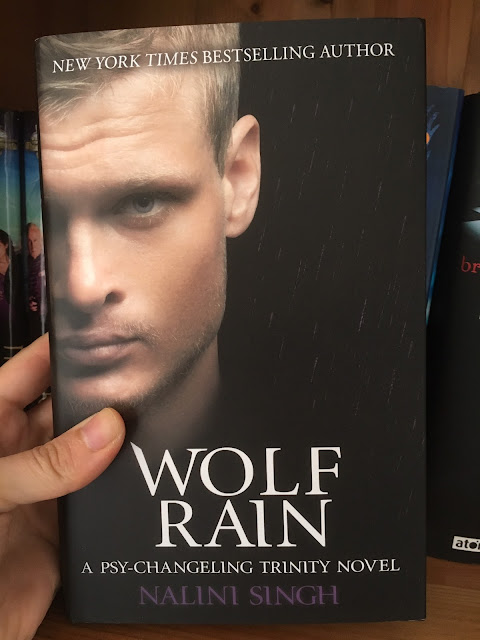 Review:
'Wolf Rain' is the latest addition to Nalini Singh's Psy-Changeling series. I haven't yet read all of the books in this fantastic series but that didn't stop me from being very excited about this new release. It hindered me slightly because of some of the references to particular characters and events but at the same time I don't think it affected my overall enjoyment at all and I found it easy to immerse myself quickly in this incredible story.

I really enjoyed getting to return to the SnowDancer pack and their world. It's my absolute favourite and I've missed reading them about. The story focuses on Alexei, one of Hawke's Lieutenants. He is a brilliant character who is still mourning the loss of his older brother Brodie who turned rogue. Alexei is extremely strong but sensitive too and is a central part of the Wolf pack. At the beginning of the story, we see him rescuing a new character called Memory from an underground prison. She is a Psy who has psychic abilities that are being used by a madman. Memory was interesting because although she has been held captive since she was a child, she has still tried to educate herself and learn about the outside world. She is well prepared to assimilate back into society if the chance to escape arrives and she hasn't been broken by her traumatic experience.

The relationship between Alexei and Memory is at the very heart of the story. They are brought together under difficult circumstances but there is an instant bond between them. They need each other in different ways which they begin to understand as the story progresses. Alexei allows Memory to explore who she is outside of her prison and she in turn, brings light and life into Alexei's world. She makes him laugh and opens his heart in a way that he has never experienced before. I thoroughly enjoyed reading about them both, although there is the added complication of the fact that Memory's captor is still trying to get her back. This means that danger stalks them both and the stakes are higher than ever.

I loved the SnowDancer community and all of Alexei's pack mates. I could sense the love and support between them and it was great seeing them interact with each other. They are very welcoming to Memory and they make her feel part of their family - something that she was robbed of.

The plot was fast-paced and exciting. I couldn't put the book down. I suspected from the start that it was going to come down to a head to head between Alexei and Memory's kidnapper, so I was on the edge of my seat up to the thrilling final conclusion.

Nalini Singh has done it again with this amazing new instalment to the series. 'Wolf Rain' is paranormal romance at its very best and it won't disappoint fans of the series or even those who are newcomers to this incredible world.


If you have enjoyed reading this review and would like to buy the book, please consider purchasing via my affiliate links from Amazon or the Book Depository.
Posted by Samantha (A Dream of Books) at 00:00