Synopsis:
A watching face in a market crowd, a mist-shrouded figure on the moor, a haunting presence seen only when he wants to be seen--Sezuan, possessor of the Serpent Gift for lie and illusion, is a chilling and ambiguous figure at the best of times.

He is also Dina's father.

And when he comes to claim the daughter he has never seen, the Shamer and her family are catapulted into reckless flight and danger. With nowhere else to turn, Dina must learn to see through her father's deceit and use her own powers to her advantage. 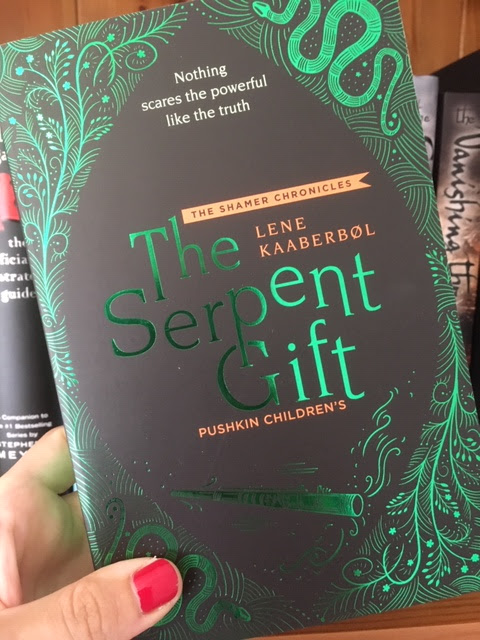 Review:
'The Serpent Gift' was another riveting instalment of this wonderful series which is just getting better and better. I think this was my favourite book so far. The plot was packed full of action and adventure, the characters are maturing and becoming like old friends and there was also a lot of powerful and emotional moments in the story.

Dina and Davin once again pick up the narrative reins, as the story begins in their Highland home. The local fair means a time of fun and celebration but all of that is ruined when Dina's long absent father unexpectedly appears. Dina's mother refuses to let him see his daughter and insists that her family leave immediately and secretively in order to escape him. I was very intrigued about Dina's father, Sezuan. We're told that he has the Serpent Gift but it's a little while into the story before it becomes clear what this is exactly. Sezuan wants to know if Dina has inherited his gift as well as her Shamer eyes. I found the father-daughter relationship in the book extremely well depicted and there were some particularly emotional and touching moments between the two. Dina doesn't know anything about her father and isn't sure if he can be trusted but I enjoyed seeing a fragile bond gradually begin to develop.

After having her gift abused in the previous book, Dina is also going through something of a crisis of faith. She has temporarily lost her Shamer ability and starts to question who she really is without it. Even though she may not be able to do what her mother can, she can always rely on her own courage and bravery to put her on the right path which is something I admire about her.

I loved the epic scope of the story and the scenes during the second half of the book which are set in the town of Sagisloc and the Sagisburg prison. Danger and desperation touches everything that befalls the characters and they are constantly having to find a way out of some very hazardous situations. Every chapter feels like it ends on some kind of cliff hanger.

Reading this series, almost feels like watching a big budget fantasy TV series unfold before my eyes. I started this book immediately after finishing the last one, so not having a break in the story has made me feel even more invested in the characters and what happens to them. If I had to be nit-pick anything, then it would just be that I'd like to have seen more of Nico. He is firmly entwined in Davin's storyline but I would even more of him because he's my absolute favourite.