Synopsis:
When America won the Revolutionary War, its people offered General George Washington a crown. Two and a half centuries later, the House of Washington still sits on the throne. Like most royal families, the Washingtons have an heir and a spare. A future monarch and a backup battery. Each child knows exactly what is expected of them. But these aren't just any royals. They're American. And their country was born of rebellion.

As Princess Beatrice gets closer to becoming America's first queen regnant, the duty she has embraced her entire life suddenly feels stifling. Nobody cares about the spare except when she's breaking the rules, so Princess Samantha doesn't care much about anything, either . . . except the one boy who is distinctly off-limits to her. And then there's Samantha's twin, Prince Jefferson. If he'd been born a generation earlier, he would have stood first in line for the throne, but the new laws of succession make him third. Most of America adores their devastatingly handsome prince . . . but two very different girls are vying to capture his heart. 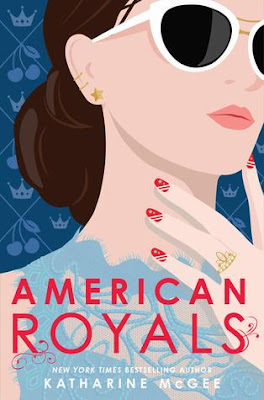 Review:
This was a fantastic read. It is an imagining of what America would be like today if instead of being President, George Washington had been made King. His descendants would therefore be sat on the throne today. It is a book that will appeal to you if you're Royal Family obsessed, can't stop reading all the news about Harry and Megan or even just love scandal, romance, gossip and a touch of intrigue. 'American Royals' has it all.

The story centres around the Washingtons - Princess Beatrice, the heir to the throne, Princess Samantha, the spare and the wild child and her twin brother Prince Jefferson. The book focuses on telling the story from the female characters point of view, so there is also Daphne Deighton who wants to finally win Jefferson's heart and climb back into the court's favour, as well as Nina - a commoner who has grown up with the Royal Family but never quite felt like she fit in.

My favourite character in the book was Beatrice and her struggle to reconcile what she truly wants with the needs of the Crown. She has a pre-destined role to play that she has been groomed for since she was young. She has to make a lot of sacrifices along the way and often struggles between her head and her heart. I enjoyed seeing her start to grow in self-confidence and exert herself more as she carries a lot of pressure and expectation on her shoulders. As well as Beatrice, Nina was an intriguing character because she is on such familiar terms with the Washingtons but at the same time, always feels like she's on the fringes. It was interesting to see how her involvement with them had an impact on other areas of her life and how she isn't entitled to the same level of protection from the eye of the media.

I enjoyed this book so much. Light, fun and a real pleasure to read. I actually thought it was a standalone but the way that it ends leaves a lot of things unresolved, so I sincerely hope that there is more to come.


If you have enjoyed reading this review and would like to buy the book, please considering purchasing via my affiliate links from Amazon or the Book Depository.
Posted by Samantha (A Dream of Books) at 23:55