Synopsis:
He is a broken, wild thing, his heart’s nature exposed by his beastly form. Long ago cursed with a wretched existence, the Beast prowls the dusty hallways of his ruined château with only magical, unseen servants to keep him company—until a weary traveler disturbs his isolation.

Bewitched by the man’s dreams of his beautiful daughter, the Beast devises a plan to lure her to the château. There, Isabeau courageously exchanges her father’s life for her own and agrees to remain with the Beast for a year. But even as their time together weaves its own spell, the Beast finds winning Isabeau’s love is only the first impossible step in breaking free from the curse . . . 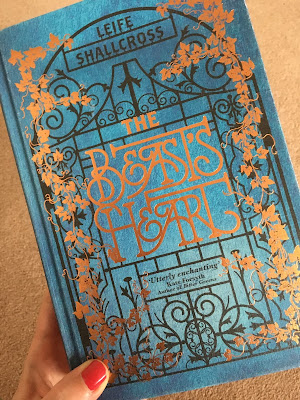 Review:
This book first came to my attention a long time ago. The beautiful cover initially caught my eye, then I read the blurb and put it on my list of books that I had to read. It's taken me this long to get hold of a copy so I was extremely excited to stumble upon it in my local library.

It's no secret that I love fairy-tale retellings. I can't get enough of them. What was intriguing about 'The Beast's Heart' is that it takes the traditional story of Beauty and the Beast and retells it from the point of view of the Beast himself. So instead of the story being told by the female characters, events are shown through the eyes of the Beast, as he tries to break the curse set upon him.

All of the key and familiar elements of the story were present. A tired traveller arrives at the Beast's home and spends a single night under his roof, picking a beautiful rose before he leaves which he plans to give to his youngest daughter Isabeau. The Beast has dreamt about Isabeau and is desperate to meet her, so he fools the old man into sending him his daughter. In return, he will grant the old man his freedom. Isabeau duly arrives at the Chateau and recognising his loneliness, agrees to spend a year with the Beast. During that time, she is afforded every luxury, as magic weaves its way around their lives and the Beast tries to win her love to free himself of a fairy's curse.

The Beast is a character that I've always liked because although he at first seems monstrous to the eye, he actually has a heart of gold. He's consumed by his loneliness which makes him desperate for company and longing for love. Glimpses are shown of his past and hints given about the reason for his transformation but personally I would have liked to have found out more about his family history. Maybe a few occasional flashbacks to the events that led him to his present situation. I loved seeing him evolve though and learn to become less 'beast' and more 'man'.

One of my favourite things about the book, was the fact that not only do we get to see things through the eyes of the Beast, but we also get to watch Isabeau's family through the Beast's magic mirror. Her two sisters who have been left behind, initially seem rather lazy and discontented but Claude and Marie soon start to change their attitudes and turn their lives around - discovering just how satisfying it can be to learn to cook and keep house. In the process, they enjoy their own romances which develop throughout the course of the story.

I really enjoyed 'The Beast's Heart' but I might possibly have liked it more if I hadn't also recently read 'A Curse So Dark and Lonely' by Brigid Kemmerer (read my review here). The latter is one of my books of the year and was such a perfect retelling with a twist of Beauty and the Beast, that Liefe Shallcross's book paled a little in comparison. Saying that, you can never have enough interpretations of fairy-tales and this one was enchanting and magical, lulling me with a promise of happy ever after.


If you have enjoyed reading this review and would like to buy the book, please considering purchasing via my affiliate links from Amazon or the Book Depository.
Posted by Samantha (A Dream of Books) at 00:00