I love visiting literary landmarks and places that have inspired great writers so for my birthday this year, one of the things I did was walk the Agatha Christie mile at Torquay in South Devon. The map below can be picked up from the Tourist Information Bureau at the harbour in Torquay and provides you with a list of 12 landmarks you can spot along the way.

Although I've been to Torquay many times before, I've never retraced the steps of the Queen of Crime, so it was exciting to see all the sites that Agatha would have visited when she was alive.

Directly behind the Tourist Information Bureau is the bronze bust of Agatha Christie that was created to commemorate her centenary year in 1990. It's absolutely beautiful and was made by a Dutch sculptor called Carol Van Den Boom-Cairns.

If you walk to the top of Beacon Hill and then go a little bit further on, the majestic Imperial Hotel stands just ahead of you. The hotel featured in 'Peril at End House' and 'Sleeping Murder' and was famously frequented by Agatha Christie herself. ﻿
﻿

On the way back down the hill, you pass the Royal Torbay Yacht Club, where Agatha's father Frederick Miller was a member.
You can also see some stunning views of Beacon Cove. In Agatha's day it was known as the Ladies Bathing Cove. She swam here frequently and once nearly drowned when she was 13. 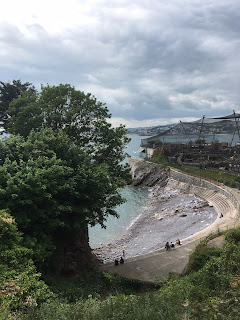 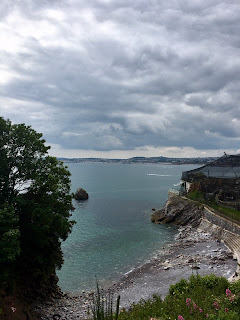 ﻿
Sadly the Pavilion is closed at the moment but this is the site of Agatha's engagement to her first husband Archie Christie.
As you stroll along the seafront, you can see the Princess Gardens which were featured in The ABC Murders. The Princess Theatre also hosts the official Agatha Christie Company tours each year.

It's also nice to walk to the end of the Princess Pier and back again. It was built in 1890 and was a favourite spot of Agatha's. She roller-skated on the Pier when she was a child.
﻿
﻿
As you walk back along the seafront to the train station, you pass The Grand Hotel. This was where Agatha had her honeymoon with Archie Christie on Christmas Eve 1914.

There are a few other stops on the literary trail. You can visit Torquay's railway station, as well as the Torre Abbey gardens where there is an Agatha Christie Potent Plants Garden. I'm also hoping at some point to visit the Torquay Museum which is home to the Agatha Christie Gallery.

Have you walked the Agatha Christie Mile? If so, which landmarks did you enjoy seeing?