I'm hosting today's stop on the 'Hey, Sherlock!' blog tour. I'm delighted to have a fantastic guest post from author Simon Mason to share with you all. 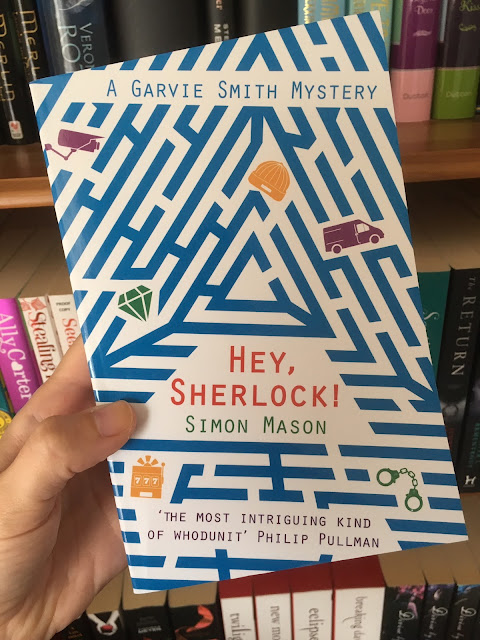 "In March 2012 I decided to try to write a crime novel featuring a teenager.

Why crime? Because of the interest: it’s obvious that human beings are deeply interested in wrong-doing. Also because of the story-telling: the best crime novels exemplify what I call ‘the ancient art of literary hypnosis’ – as practiced by other writers interested in crime such as Homer, Dostoevsky and Stephen King – that mesmerizing story-telling which will not let you go. I admire it very much, and I wanted to try it myself.

Why teenager? Of all the astonishing things in the world – the 2012 Olympics, say, or Triple Heart Bypass, the Chrysler Building or Trump – teenagers are the most astonishing. Human exploding devices bursting out into the world in great starbursts of attitude and inventiveness and fantasy and humour.

Why Garvie Smith? My mother, who is a therapist, would have something to say about the fact that a polite, unassuming, modest, conforming sort of person such as myself should have been drawn to the phenomenally lazy, spectacularly rude and often frankly infuriating Garvie Smith.

Actually, the idea for a super-bright, super-lazy, super-infuriating boy came from a friend of my son. I don’t mean he gave me the idea, I mean he was the idea. Between the ages of thirteen and nineteen he really did nothing at all. But he was probably the smartest person I’ve ever met.

It occurred to me that super-bright, super-lazy sixteen-year-old boys – the sort who can’t be arsed to do anything, who wag off school and slouch down to the kiddies playground to pass round a spiff and almost-empty half bottle of Glenn’s vodka – are very well represented in life but not in literature. They’re not great role models, it’ true. They’re anti-heroes.

But my hunch was that, actually, we relish anti-heroes – we positively cheer them on in their bad behaviour. Let’s face it: the word is full of stupid figures of authority, and who hasn’t wanted to tell them to their face that they’re stupid? Who hasn’t fantasised about just not bothering to do that interminably boring piece of work assigned to us some humourless superior? Who hasn’t wanted to tune out quite large parts of the world from time to time?

And I also had a hunch that if a very bright, very lazy boy got interested in something – a murder, for instance – he might just prove to be a little bit brilliant in working out what the police weren’t able to. Although he might arse it up completely for the official police effort, the case might get solved.

So Garvie Smith slouched into my imagination, and – upright, unbending, humourless – along came DI Raminder Singh too, the Sikh detective unfortunate enough to be the ‘official police effort’. Well, I feel sorry for him.

And in this way I arrived at my own variation on the classic detective duo (Holmes and Watson, Starsky and Hutch, Morse and Lewis): Garvie and Singh, a difficult teenager and an uptight Sikh.

What could possibly go wrong?"

'Hey, Sherlock' is out now, published in the UK by David Fickling Books. Don't forget to check out all of the other stops on the blog tour and come back soon to read my review of the book.
Posted by Samantha (A Dream of Books) at 07:03