Review: October is the Coldest Month by Christoffer Carlsson

Vega Gillberg is 16 years old when the police come knocking on the door looking for her older brother, Jakob. Vega hasn’t heard from him in days, but she has to find him before the police do. Jakob was involved in a terrible crime. What no one knows is that Vega was there, too.

In the rural Swedish community where the Gillbergs live, life is tough, the people are even tougher, and old feuds never die. As Vega sets out to find her brother, she must survive a series of threatening encounters in a deadly landscape. As if that wasn’t enough, she’s dealing with the longing she feels for a boy that she has sworn to forget, and the mixed-up feelings she has for her brother’s best friend.

During a damp, raw week in October, the door to the adult world swings open, and Vega realises that once she has crossed the threshold there is no turning back. 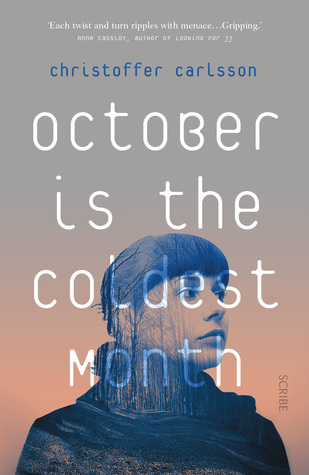 Review:
This book is translated from the Swedish original text by Rachel Willson-Broyles. Reading it felt like delving into a short crime novella with an intriguing mystery to solve which lay at the heart of the story. It is set in a small rural Swedish community where everyone knows everyone. This creates a suffocating and stifling atmosphere. People have secrets but these secrets are hard to keep hidden.


The main character, Vega Gillberg, is sixteen years old. At the beginning of the book she is being questioned by the police about the whereabouts of her older brother Jakob. As the plot begins to unfold, it’s clear that Vega knows that someone has committed a dreadful crime. However, she is not certain of who was involved and why, so she begins to try to connect all the dots. I enjoyed the air of mystery which the story stirred up and like Vega, I was kept guessing until the very end.

What I did find hard about the book was that I didn’t particularly feel that any of the characters were very likeable. While I enjoyed following the threads of Vega’s quest to uncover the truth, I didn’t connect with her as the central character and so I struggled with some parts of the book which were quite introspective.

Overall, I thought that ‘October is the Coldest Month’ was a chilling and atmospheric YA crime story. It spends time looking at the role of women and how they are treated by men. Vega has to deal with her feelings towards the men in her life: Uncle Dan, brother Jakob and local boy Tom. Many of the men in the novel are menacing and don’t always turn out to be how they first appear. This adds a nice air of danger to the story, as it’s hard to know who can be trusted.

Although this book wasn’t as good as some other YA crime novels that come to mind, it was still a quick and enjoyable read with an unexpected and surprising finale.
Posted by Samantha (A Dream of Books) at 00:00