Rogue by Julie Kagawa, published by Mira Ink on 7th May 2015

Goodreads synopsis:
Ember Hill left the dragon organization Talon to take her chances with rebel dragon Cobalt and his crew of rogues. But Ember can't forget the sacrifice made for her by the human boy who could have killed her—Garret Xavier Sebastian, a soldier of the dragonslaying Order of St. George, the boy who saved her from a Talon assassin, knowing that by doing so, he'd signed his own death warrant.

Determined to save Garret from execution, Ember must convince Cobalt to help her break into the Order's headquarters. With assassins after them and Ember's own brother helping Talon with the hunt, the rogues find an unexpected ally in Garret and a new perspective on the underground battle between Talon and St. George. 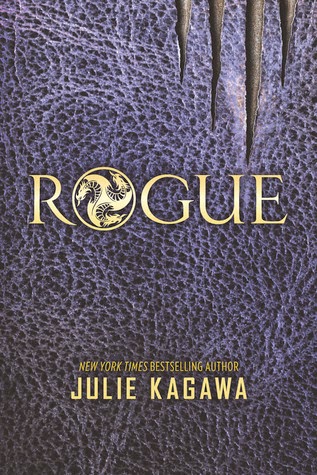 Review:
If you're looking for a scorching hot read, then look no further than 'Rogue' by Julie Kagawa, the follow-up to the brilliant 'Talon'.  The second book in this fantastic series manages to do what few books can and that is to be even more gripping and captivating than it's predecessor.  There's no case of second book syndrome here, as Julie Kagawa cranks up the action, ramps up the tension a couple of notches and leads the reader on a breathless journey of rescue, capture and escape.  'Talon' held me in thrall from the opening chapter and this was one book that I was most definitely going to finish reading in one sitting.

The story picks up after the action of 'Rogue' with Ember and Riley on the run and Garret held to account for his actions by the Order of St. George.  It didn't take me long to get reacquainted with all the characters and the plot threads and I was soon immersed back into the world of dragons.  I have read a lot of dragon books, going through quite a phase when I was in my teens, but this is the first series I've read where the author is spot on with the mythology and the world building.  I love the idea of dragons assimilating themselves into the human world and walking amongst us without anyone realising.

The commentary is shared between Ember, Garret, Riley and Dante, with occasional flashbacks to twelve years ago when Riley, as rebel dragon Cobalt, was still working for the organisation he now despises.  I wasn't too sure about Riley in the last book but he has suddenly become my number one favourite character.  It was great discovering more about him and his past and I really enjoyed all the scenes between not only him and Ember but also him and Wes, his right-hand man.  The love triangle between Riley, Ember and Garret continues to play out and while I feel strongly that I know which way it's going to end up, I am still firmly shipping Riley and Ember as a couple.  They are great together and share a real understanding and bond.

There are some terrific action sequences in the book, particularly in the second-half of the story and I was on the edge of my seat throughout these.  I honestly had no idea if everyone was going to make it to the end of the book alive.  There is also a humongous revelation right at the end of the last chapter which leaves the reader on a massive cliff-hanger.  I need to know now what is going to happen next!

The third book in the series, 'Soldier' will be published in 2016 unless my wish is granted and it gets an earlier release date!
Posted by Samantha (A Dream of Books) at 00:00