The Immortal Rules by Julie Kagawa, published by Mira Ink on 4th May 2012

Allison Sekemoto survives in the Fringe, the outermost circle of a vampire city. By day, she and her crew scavenge for food. By night, any one of them could be eaten.

Some days, all that drives Allie is her hatred of them. The vampires who keep humans as blood cattle. Until the night Allie herself is attacked—and given the ultimate choice. Die… or become one of the monsters. 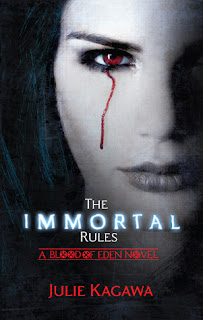 Review:
'The Immortal Rules' is a stunningly imaginative story from author Julie Kagawa.  Adopting a fresh approach to the traditional tale of vampires, she has managed to bring something new to this popular genre.  Having seen rave reviews of this book I had high expectations which were met in every single way.  I was completely engrossed in the story which was brilliantly written and proves once again what a fabulous talent Kagawa is.

At nearly five hundred pages long this is a big book but it's pure entertainment the whole way through.  The story is set in a future world where the main protagonist Allison Sekemoto is living on the fringes of society, an Unregistered, who is determined never to be used as a meal ticket by the vampires who rule the city.  After she and her friends are discovered, life for Allison will never be the same again as her whole existence changes.

The world which Kagawa has created is incredible.  A large proportion of the first section of the book concentrates on filling the reader in on the background history of the vampire hierarchy and this was fascinating.  It did mean digesting a lot of information within the first hundred pages but helped to set the scene for the rest of the story.  The amount of detail was truly amazing and the use of imagery allowed me to conjure up characters and places really vividly in my head.

Allison develops some interesting relationships in the book, particularly with her mentor Kanin and with Zeke.  Even after her life changes though, she's still Allison and determined to remain so, protecting others and making sure that those she cares about are safe.  I liked the way the story was split into sections, each one showing a different side to Allison and leading her down her future path.

This was a superb book which I found difficult to put down.  It's full of adventure and excitement, plus a generous amount of blood and gore, so probably not for the faint-hearted.  I'm already dying for the sequel which can't come soon enough!
Posted by Samantha (A Dream of Books) at 00:00