A Face Like Glass by Frances Hardinge, published by Macmillan Children's Books on 10th May 2012

Goodreads synopsis:
In the underground city of Caverna the world's most skilled craftsmen toil in the darkness to create delicacies beyond compare - wines that can remove memories, cheeses that can make you hallucinate and perfumes that convince you to trust the wearer, even as they slit your throat. The people of Caverna are more ordinary, but for one thing: their faces are as blank as untouched snow. Expressions must be learned, and only the famous Facesmiths can teach a person to show (or fake) joy, despair or fear - at a price.
Into this dark and distrustful world comes Neverfell, a little girl with no memory of her past and a face so terrifying to those around her that she must wear a mask at all times. For Neverfell's emotions are as obvious on her face as those of the most skilled Facesmiths, though entirely genuine. And that makes her very dangerous indeed ... 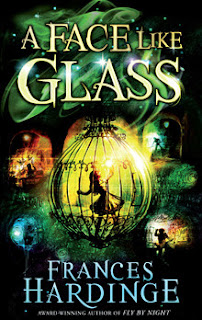 Review:
'A Face Like Glass' is the fifth book by British author Frances Hardinge.  It's one of the most original and spellbinding stories I've ever come across.  I can't even begin to try and compare it to anything else because it stands in a league of it's own and is so unusual and surprising that I could never guess what was going to happen from one chapter to the next.  This is one of those books that will gradually creep up on you to the point that you won't be able to think about anything else.  It's the perfect read for a lazy Sunday when you can read and read all day without ever having to put this book down.

Frances Hardinge has created something truly magical in the world of Caverna - an underground city where people can't express real emotion, where the Grand steward wields power with the help of his Right and Left Eye and where foods are potentially explosive and win can retrieve or hide memories.  I was continually astlounded by the millions of little details that were woven into the story.  This is a world unlike any other.

The most interesting thing about the people of Caverna is that their faces are all masks of expressions which have been learnt as their own faces are blank canvases.  Some people have been taught hundreds of different faces which they can alternate between as required and others, like the drudges of the city, only have two or three.  Amidst the people of the city, we are introduced to Neverfell who is the central figure in the story - an eleven year old girl who is set to change Caverna's whole future.

I have to say that a lot of things happened to Neverfell throughout the story but it wasn't until the very end that I was able to piece it all together and make sense of everything.  The puzzle finally made sense and I could sit back and admire the cleverness and ingenuity of the plot.

I adored 'A Face Like Glass' and am now depserate to read all of Frances Hardinge's other books.  She's a real talent!  I can't wait to tell everyone I know about this stunning book.  Read it or regret it forever.
Posted by Samantha (A Dream of Books) at 00:00