Review: It's Not Summer Without You - Jenny Han

It's Not Summer Without You by Jenny Han, published by Puffin on 5th May 2011

Goodreads synopsis:
Last year, all of Belly’s dreams came true and the thought of missing a summer in Cousins Beach was inconceivable. But like the rise and fall of the ocean tide, things can change-- just like that. Suddenly the time she's always looked forward to most is something she dreads. And when Jeremiah calls to say Conrad has disappeared, Belly must decide how she will spend this summer: chasing after the boy she loves, or finally letting him go. 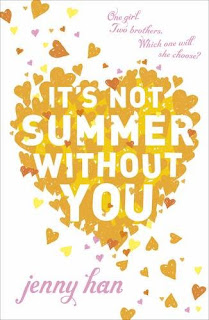 Review:
There may be spoilers from the previous book in the series.
﻿'The Summer I Turned Pretty' was one of my absolute favourite books of last year and introduced me to the wonderfully talented Jenny Han.  I was therefore extremely eager to read the sequel and second book in the trilogy, 'It's Not Summer Without You'.  I am hugely pleased to report that it's just as good, if not even better than the original.  It's a perfect summer read and will definitely appeal to the majority of the teen audience.
The story picks up after Belly's life-changing summer in Cousins.  She thought she'd finally got the boy she'd always longed for; the boy who'd always held her heart in the palms of his hands but nothing is ever perfect forever and things for Belly are set to change.  After the death of Susannah, Belly will never spend the same summer in Cousins again.  So much a part of her childhood, everything seems to be changing around her, whilst she's also dealing with overwhelming feelings of grief and sorrow.  When she receives an unexpected phone call from Jeremiah, telling her that Conrad is missing, she immediately agrees to help find him but soon finds herself caught between the two boys yet again.
The relationship Belly has with Conrad and Jeremiah has always been at the heart of the series so far, but in this book is really brought to the fore.  Belly has always loved Conrad but he's never been able to reciprocate her feelings fully, except for the one perfect night they spent together.  He's so intrinsically linked with the person she is; her hopes and aspirations for the future, that she wonders if she can ever let him go.  One of the things I admire hugely about Jenny Han's writing is her ability to vividly recreate and evoke feelings that we've all experienced, such as those of first love and of knowing someone and falling in love so deeply that it's impossible to see anyone but them.
Jeremiah has always been on the sidelines.  He's the responsible one, the one that takes care of everyone else and the one who Belly never chose.  I really enjoyed the chapters interspersed throughout which showed how he viewed certain events and these provided great insight into how he truly felt about Belly.
Reading the book, I was absolutely torn between the two boys as well, so I know how Belly feels.  Conrad has hidden depths and is extremely private but is capable of deep emotion (and he's oh so hot!) while Jeremiah is the boy who will never let you down.  Okay, okay, maybe Conrad just has the edge for me but how lucky is Belly to get to choose between these two.
Although this triangle lies at the centre of the book, it also highlights much deeper issues, such as the death of a loved one.  I thought that Han dealt with this sensitively and realistically, showing the impact a bereavement can have on people and the different ways in which they cope with an event like this happening.
This was a wonderful book which I fell in love with.  No second book syndrome here, that's for sure!  The characters feel like old friends, the writing is clever and witty and conjures up all those feelings of growing-up and standing on the precipice of adulthood.  I've added it to my favourites shelf already.
I have to just end by say that the ending is evil!  I couldn't believe how Han left it and I am now dying for the last book in the trilogy, 'We'll Always Have Summer'.  The anticipation is going to kill me!  Will we finally know what or who Belly chooses for her future.  I can't wait to find out!
Posted by Samantha (A Dream of Books) at 00:00