Ellie was never particularly good at talking to boys—or anyone other than her best friend and fellow outcast, Ruth. Then she met Michael. Michael is handsome, charming, sweet. And totally into Ellie. It’s no wonder she is instantly drawn to him. But Michael has a secret. And he knows Ellie is hiding something, too. They’ve both discovered they have powers beyond their imagining. Powers that are otherworldly.

Ellie and Michael are determined to uncover what they are, and how they got this way . . . together. But the truth has repercussions neither could have imagined. Soon they find themselves center stage in an ancient conflict that threatens to destroy everything they love. And it is no longer clear whether Ellie and Michael will choose the same side. 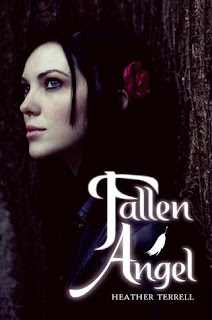 Review:
This is one of those books that on paper sounds like it's going to be the perfect story.  In reality, although I thought I was going to love it, I had very mixed feelings about 'Fallen Angel'.  It definitely didn't completely win me over, although I'm still trying to put my finger on quite why.

The plot centres on Ellie, who has been having strange dreams in which she can fly.  When she meets new guy Michael at school, the two are instantly drawn together, even though he claims that they met in the past but she has no recollection of him.  Their relationship soon starts getting serious and Michael helps Ellie to begin to understand the feelings that she's been experiencing and the dreams she's having.  From then on, it's full steam ahead between the two of them but there's a deeper mystery still to be uncovered in which they could end up playing a major part.

All the ingredients are there for this to be a captivating read.  It has a strong supernatural base which is always something which appeals to me, it features a female protagonist with a mystery and an obligatory sidekick, there's a hot guy, a battle between good and evil and a number of interesting revelations about the characters.  However, I found that all of these elements didn't always gel and frankly, sometimes the story was so slow that I found my attention kept wandering away from the pages in front of me.

Some parts of this book were good but overall it just didn't grip me.  The plot wasn't very original and I guessed a lot of things before they actually happened which meant that I was often tempted to skip ahead to the end which is never a good sign.

Regardless of all this, I do think that there's still plenty of potential for the second book in the series, 'Eternity' but the storyline will really need to improve to get me well and truly hooked.