Kate has escaped the clutches of the High Council and Silas has left Albion for the continent. But their lives are forever linked and as the veil weakens, causing Albion's skilled to fear for everyone's safety, Silas and Kate find themselves drawn together by the mysterious and corrupt Dalliah Grey. 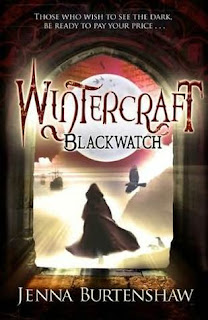 Review:
I am a huge fan of Jenna Burtenshaw's debut novel, 'Wintercraft' which was published last year.  It absolutely blew me away with its brilliance so I was really eager and very excited to receive a proof copy of the sequel from the wonderful publisher Headline.

The story picks up immediately after the events of 'Wintercraft'.  Kate has been imprisoned by the Skilled who believe that she is a huge danger to the world.  She is a Walker, and her spirit is able to move between the worlds of the living and the dead.  The Skilled fear this power as Kate is untrained and her very presence can weaken the veil between the two worlds, blurring the boundaries between life and death.  Kate is also being hunted by the Blackwatch, who are part of the Continental Army and will stop at nothing to get their hands on Kate.  Silas Dane, a significant character from the first book, also makes a return and he too is being held at the mercy of the Blackwatch, whose motives are uncovered as the story progresses.

Kate is a real heroine.  She's so brave and has to face such adversity but she never gives up and although she has a difficult path to follow is always prepared to do what's right, even when it might not necessarily be the easy choice.  I'm a huge Silas Dane fan and I thought that he was really well developed in this installment.  He's often difficult to read as he's quite a complex and mysterious character and you never quite known whether he's good or bad but I think that's what makes him so interesting.  I look forward to seeing more of his interactions with Kate and finding out how their relationship will progress.  Plus, I love his ever faithful crow - I think we should all have one!

I have to say that Jenna Burtenshaw has done it again!  She's created an incredible imaginary world, in Albion and crafted wonderfully three-dimensional characters who come to life on the page.  The story flows beautifully and the plot, as in her previous book, is interesting, unpredictable and gripping.  I really think that this series could be turned into a film franchise, because everything is described in such vivid detail and I'd love to see these characters up on the big screen.  The series so far reminds me a little bit of Narnia crossed with Philip Pullman's Dark Materials books.  It's absolutely enchanting and would appeal to those who are fantasy fans, as well as those who are new to the genre.

Jenna Burtenshaw can't write the next installment of this fabulous series quick enough for me, as I'm eager to read more about Kate and Silas and their adventures.  'Blackwatch' was a real page-turner and compulsive reading.  Make sure you clear your schedule before you pick it up because once you've started, you won't want to stop.

Find out more about the series at: http://www.wintercraft.co.uk