Goodreads synopsis:
When Sky catches a glimpse of Zed for the first time, lounging against his motorbike at school, she is drawn to him just like every other girl in Wickenridge. But Zed sees something special in her that the other girls don't have. Zed tells her they are both Savants - people with special powers like telepathy and the ability to see into the future. Not only that, she is a Savant too, and his soulfinder - meant to be together. 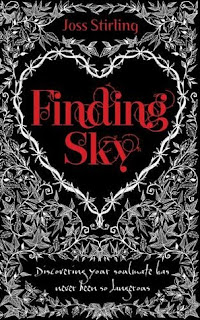 Review:
This book appealed to me instantly - a girl with a mysterious secret, a bad boy in town and a paranormal mystery which might threaten both of their lives.  It's also written by a British author and is her debut novel so as I'm trying to read more home-grown talent this was another point in its favour.

The first chapter was brilliant and really helped to set the scene for the secret surrounding the main character Sky's history.  This was carried on throughout the book and really had me puzzling over what might actually have happened to her.  This sense of suspense was well executed, right up to the big reveal.  After the initial opening, I found that it did take me a little while to get fully involved in the story and the characters, however, things clicked for me about a third of the way through and from then on I was totally sucked in.  The story picked up pace and then hurtled along to it's very exciting and breathtaking conclusion.

As I found out more about Sky, on whom the story is centred, I discovered myself empathising with her completely and really rooting for her character to come out on top.  She's had a tough start in life and was adopted when she was ten by Sally and Simon, a married couple who take her to live in America when they get offered a great job opportunity.  Starting at her new school she meets resident bad boy Zed Benedict, who also happen to be all kinds of hot!  They soon get off on the wrong foot with each other until Sky discovers that she can hear his voice talking to her in her head, a revelation that leads to the discovery that Sky is a savant and Zed is her Soulfinder, or other half and they are destined to be together forever.  Sky finds the news of this difficult to accept and spends a fair amount of time trying to push Zed away.  I loved the scenes where Zed is trying to start afresh with Sky and trying to show her his true character inside.  She's insecure and uncertain throughout much of the book but I enjoyed her gradual progression to becoming more confident and happy and the way in which she eventually blossoms into who she's truly meant to be.

The story had just the right amount of romance between Sky and Zed and I thought the tenderness and care which he shows towards her was incredibly touching.  Sky isn't a girl that's going to fall into his arms straight away and Zed has to try and win her affections and woo her the old-fashioned way.  In a lot of books, the girl is often head-over-heels for the boy from almost the first page, so this made a very refreshing change.

I believe that this is actually a stand-alone book and as far as I know Joss Stirling doesn't have any plans for future installments about Zed and Sky which is a shame because I'd love to read more about them.  Zed also has six other brothers too and it would be fascinating to follow them on their quest to find their own Soulfinders.
Posted by Samantha (A Dream of Books) at 00:00